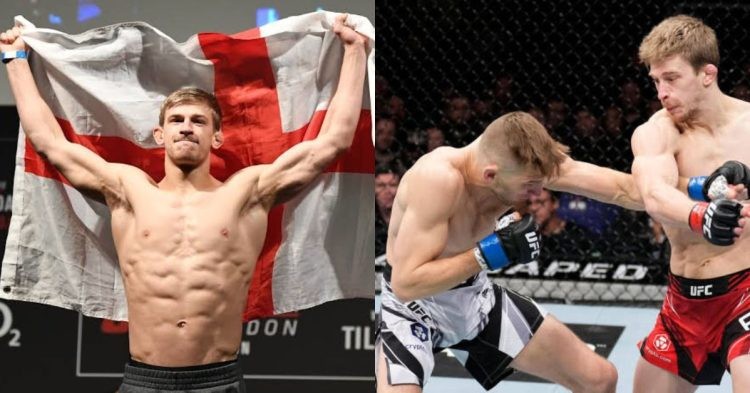 Arnold “Almighty” Allen is all set to take on number fifth-ranked bantamweight contender Calvin Kattar in the main event of UFC Fight Night which will take place on October 29th at the UFC Apex.

Allen made his UFC debut back in 2015 and since then has racked up nine straight victories and currently is positioned sixth in the bantamweight rankings.

Allen holds an impressive professional record of 18-1 and has wins over notable bantamweight contenders like Dan Hooker, Gilbert Melendez, and Sodiq Yusuff in his nine-fight winning streak and is coming off a highly impressive first-round knockout victory against Hooker earlier this year.

KATTAR vs ALLEN! #UFCVegas63 is LIVE TOMORROW on @ESPNPlus! pic.twitter.com/QNE2goKC9B

In his seven-year-long UFC career, Allen has made a lot of money. His total career earnings are estimated to be around $585,000. Today we will look closely at Arnold Allen’s career earnings from his fighting career in the UFC.

After competing in various organizations, Allen made his UFC debut against Alan Omer, who he submitted in the third round and took home a ‘Performance of the Night (POTN)’ bonus. He reportedly earned $10,000 to show and $10,000 to win plus the $50,000 POTN bonus.

Allen’s earned a similar amount of money, between $30,000 to $50,000, for his victorious performances against Makwan Amirkhani and Jordan Rinaldi. Allen then submitted Mads Burnel in 2018 and earned his second ‘Performance of the Night’ that took his total payout that night close to $100k.

As per some reports Allen has comfortably made more than $100,000 in his last three fights, many even reporting his total payout going past $150k in his last POTN performance against Dan Hooker.

Calvin Kattar is by far the toughest competition Allen will face inside the octagon as Kattar has shared the octagon with some highly experienced fighters like Josh Emmet, Max Holloway, Jeremy Stephens, and many more. Although Kattar has lost two out of his last three fights, he is still one of the most dangerous fighters in the featherweight division.