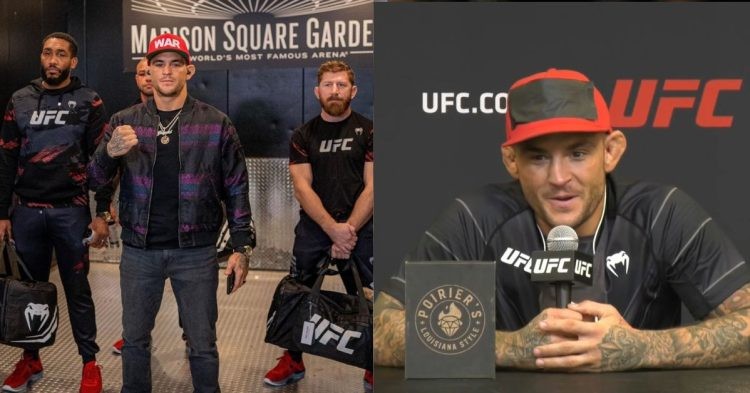 During UFC 281, The UFC took a few actions that were out of the ordinary. UFC president Dana White takes a lot of pride in the fact that he runs an organization where fighters are allowed to express themselves in whatever way they want to. From cuss words to lifestyle choices, the UFC has never shun, or shut fighters up due to any action of theirs outside the octagon. Various UFC fighters have had run-ins with the law in the past. Some of the fighters keep having them even after joining the UFC. Despite that, UFC lightweight Dustin Poirier was restricted from expressing himself at UFC 281.

But recently, through some of its actions, it can be seen that the UFC has become less tolerant towards anything that might get it into trouble. The spirit of political correctness seems to have caught up with the company.

The legendary middleweight champion in boxing, ‘Marvelous’ Marvin Hagler wore a red colored hat during one of his most iconic interviews. The hat had the word ‘WAR’ printed on it in bold capitals. This weekend, Dustin ‘the diamond’ Poirier was seen sporting a replica of the ‘WAR’ hat ahead of his fight against Michael Chandler. The former interim champion allegedly planned on wearing it to the UFC 281 pre-fight presser, but the UFC seemingly stopped him from doing so.

The wait is almost over 🍿 #UFC281 pic.twitter.com/JTMNfA3WfS

The true reasons behind the UFC allegedly stopping Poirier from wearing his ‘WAR’ hat are unknown. UFC fans and the media are speculating reasons for the same. It would be a reasonable assumption that the UFC didn’t let Poirier wear the hat because of the war that’s going on between Russia and Ukraine.

Most of the companies have adapted anti war campaigns and it can easily be the cause behind this measure. The war between the countries is a sensitive issue. The actions taken to avoid any conflict on sensitive topics is rapid. Another reason regarding this could be sponsorship or copyright issues.

The UFC has also discouraged fighters from talking about any political issues. Least of all, they’ve told the fighters to at least not use the UFC as a problem to catapult their political stances into mainstream media.

The UFC banned all flags during fighter walkouts.

Apparently this is because of Russia Ukraine conflict.

Big disappointment from a promotion which advocates free speech and individual expression.

Stop politicising everything, no one cares it’s getting boring!

Another example of the UFC acting hesitant on the political front is the ban on fighters showing their national flags off during walkouts. The fighters used to show their patriotism by bringing their flags along during weigh-ins, press conferences, and/or walkouts. But the practice was banned by the UFC. The step was reportedly taken in light of the war going on between Russia and Ukraine. Some fighters even had their flags pulled from their shoulders while flaunting it. One of those people is UFC welterweight Li Jingliang. Even UFC bantamweight Chito Vera was stopped from showing of his Ecuadorian flag.

This could be tragic for most of the fans because a lot of them looked up to the UFC as the company valued individual expression. Under pressure the UFC seems to have cracked. It looks like one of the most outspoken companies was forced to adopt the correctness as a stance.