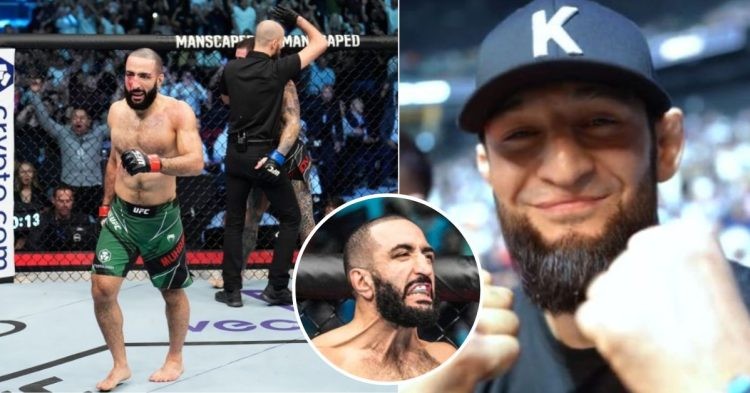 Belal Muhammad took on Sean Brandy in arguably one of the toughest tests of his mixed martial arts career, going against a seasoned grappler in the form of Brady. In what was a vintage affair, Belal picked up a TKO win in the second round to extend his winning streak. Following the victory, the Palestinian fighter called out Khamzat Chimaev for a showdown.

Many expected this to be a grappling affair, however, that wasn’t the case. In the first round, both Belal and Sean showed their skills on the feet. While Brady had huge success in the starting, Belal Muhammad really picked up the pace in the latter half, landing some significant strikes on the undefeated fighter.

Heading into the second round, Belal Muhammad put his foot on the pedal and landed some nasty right hands and uppercuts to seal the deal.

Incredible combinations from Belal Muhammad and Brady looked clueless. A series of unanswered shots, and it looked like the referee had seen enough. Belal Muhammad picked up his first stoppage win after more than five years inside the UFC Octagon. The TKO victory was also Belal’s eighth straight win inside the cage.

Bully B feelin’ like a million bucks after that win 🤑 #UFC280 pic.twitter.com/ur9weW5Ayw

It won’t be wrong to say that many expected this to be a “snoozefest” between two grapplers. However, as it turned out, Belal Muhammad and Sean Brady put on a classic as both the fighters engaged in a slugfest to close the UFC 280 preliminary card. It’s safe to say, we will “Remember The Name”.

Following the victory, Belal reignited his rivalry with Khamzat Chimaev as he called out the Borz with Khabib Nurmagomedov watching from a distance.

Belal Muhammad and Khamzat Chimaev have exchanged words in the past, with the duo seemingly confirming a match-up earlier this year. However, Chimaev later accepted a fight against Nate Diaz and ended up fighting Kevin Holland in the middleweight division.

“I heard Leon Edwards is out here. I also heard the big bad wolf is coming back down, I can fight at 179.8, no matter to me. I am here to fight the best people.” Muhammad said during the post-fight Octagon interview. Khamzat Chimaev was present inside the Etihad Arena at UFC 280. However, the camera did not pan at the welterweight star.

Me vs khamzat at 185 Tony vs Nate at 170 and. leech can be the special guest referee

Belal also has a history with current welterweight champion Leon Edwards. The duo shared the cage back in March of 2021, with the fighting ending in a No-Contest after an illegal eye-poke. With a win over Brady, a lot of doors open up for Belal Muhammad, who has largely remained underrated, but not anymore.