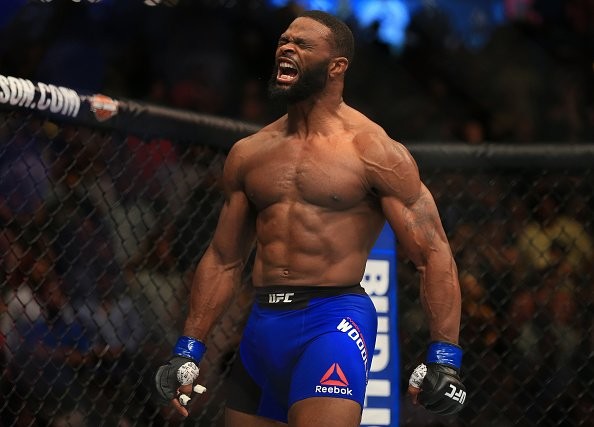 As per reports, former UFC welterweight champion, Tyron Woodley will make his pro boxing debut against Jake Paul. The date for this fight has not been announced yet but it can be expected that these two rivals will fight each other very soon as the faceoff will be potentially held in Miami this Friday.

Tyron Woodley has been calling out Jake Paul ever since the altercation in Paul’s locker room before the Ben Askren fight. Jake Paul defeated Askren via 1st round stoppage. And hence this fight is an intriguing one as Woodley will have an opportunity to avenge Askren’s loss.

However, this is not going to be an easy fight for Woodley. It’s going to be his boxing debut and he is on a 4 fight losing streak at the moment. It’s safe to say that the best days of Tyron Woodley are behind him. And many fans are going to count him out in this fight against Jake Paul who has knocked all his opponents out.

However, Woodley seems as confident as he has ever been ahead of his boxing debut. Tyron Woodley sent a message to Jake Paul on his IG story and said:

“Love the energy of the young Lion. Another one will learn soon.”

Jake Paul is a serious threat to Tyron Woodley

The former UFC champion recalled the time he took on Darren Till, who was one of the greatest prospects at the time. Till was unbeaten in UFC at that time and everyone believed that he would be the next welterweight champion. But, Woodley dominated Till to defend his title, proving the critics wrong.

It seems Woodley is expecting a similar result for his fight against Jake Paul. However, Jake Paul can not be underestimated. Ben Askren paid the price with a humiliating defeat to Jake Paul and Woodley can not repeat the same mistake.

It’s not going to be an easy fight for Woodley even if he is a much better striker than Ben Askren. Jake Paul has been training in the sports of boxing for close to 4 years now. He has top-level trainers, facilities, nutritionists, everything that a boxer could imagine in the early stage of his career. And even though Jake Paul is a polarising figure it can not be denied that he has commendable boxing skills and knock-out power.

Who do you think wins this fight?