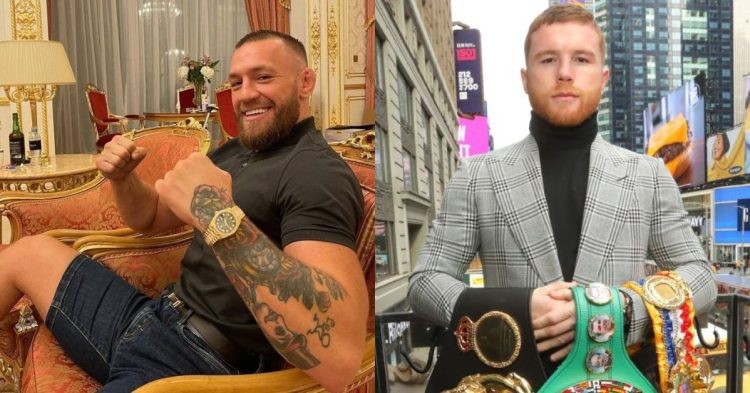 Conor McGregor beats Canelo Alvarez to be the No.1 fastest earning athlete of 2022 (Credit: Instagram)

Conor McGregor grabs the No.1 spot in the World’s Fastest Earning Athlete of 2022. He is the only mixed martial artist to be in the top 10 rankings and surpasses Boxing stars Canelo Alvarez, Tyson Fury, and Jake Paul.

According to OLBG, ‘The Notorious’ earned $1 million every nine seconds of his last UFC appearance. He last fought Dustin Poirier in July 2021 at UFC 264 and hasn’t competed since fracturing his tibia and fibula in that fight.

McGregor earned $33 million while Alvarez made a whopping $85 million in their last bouts. Though McGregor cashed less than Alvarez in their last bouts, it took only 9 seconds for the Irishman to earn $1 million and earned $6.6 million per minute.

McGregor appeared for only 5 minutes as the fight lasted just 1 round before the fight was stopped. He earned a basic salary of $3 million just to show up. Additionally, McGregor earned sponsorship money and a PPV share of 60%. He also took to Twitter to make this announcement.

As for Alvarez, it took him 43 seconds to earn $1 million. He earned $85 million for every minute he played. ‘Canelo’ last fought Gennady Golovkin, Dmitrii Bivol, Caleb Plant, and Billy Saunders. In his last fight against GGG, Alvarez earned a guaranteed $45 million purse to show up and additional money from sponsorships and DAZN PPV share.

The next on the list are Tyson Fury and Jake Paul and their on-field earnings are $60 million and $30 million. The rest of the list is filled with Basketball and Football players.

As of November 2022, Conor McGregor’s net worth stands at $200 Million. The Irishman is the world’s richest MMA fighter and became No.1 in Forbe’s highest-paid athlete of 2021. He is also the highest-paid athlete in the UFC and though he suffered a defeat in his last fight, he took home a solid $33 million.

McGregor has multiple business endeavors and endorsement deals but he makes the most money from his whiskey business, Proper 12. As per the reports, the whiskey company is now worth $600 million.

Besides that, McGregor has a sports media house named The Mac Life, a clothing brand – August McGregor- that sells menswear. He has a sports management company named McGregor Sports and Entertainment, which generates a lot of money from advertisements and other promotions.

McGregor recently launched TIDL Sport which is a plant-based recovery therapy. ‘The Irishman also launched a conditioning program named F.A.S.T. This also comes in a mobile application and was developed by renowned sports doctors and physiotherapists.