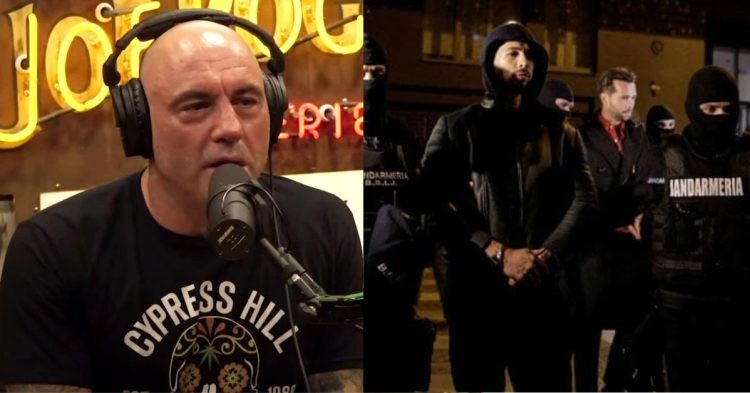 Joe Rogan discusses Andrew Tate and his arrest in the latest episode of his podcast. (Credits: YouTube)

Joe Rogan is known for discussing the latest happenings in the world. As such, Joe, along with his guest Dave Portnoy, spoke about Andrew Tate in the latest episode of “The Joe Rogan Experience.”

Recently, viral internet sensation Andrew Tate was arrested on the grounds of human trafficking, r*pe, and organized crime. Andrew along with his brother Tristan and a few others were detained by the Directorate for Investigating Organized Crime and Terrorism on December 29th.

During episode #1920 with Dave Portnoy, Rogan admits to watching Tate on Patrick Bet-David’s podcast. Rogan says, “I don’t know him. If I did know him, I would tell him all the boastful s**t and the s**t about him being the Top G and all that stuff – all that s**t’s great, but the misogynistic stuff – like, if you have daughters or if you have a wife or if you have sisters, you don’t want that.

“That narrative, putting that out there, that’s negative – to everybody. It’s not even positive to him. It’s like, it’s not necessary,”

The UFC commentator believes that Andrew’s ‘boastful’ character is great and a big reason for his fame. After watching and observing what Tate said, Rogan believed that the former kickboxing champ was actually a very wise person. However, Joe thinks that Andrew intentionally says wise things and then some “ridiculous sh*t.”

Unsurprisingly, like others that have spoken about him, Joe Rogan also claims that Tate is a ‘smart guy’. “You get to see this a very intelligent and calculated guy”, Joe commented.

Although Rogan does not personally agree with a lot of things that Andrew has to say, he understands why the ‘Top G’ is popular with young men.

Interestingly, Joe is still on the fence regarding the accusations against Tate. In fact, the UFC commentator believes that authorities in Romania are questionable and if innocent, Andrew should consider leaving the country as soon as possible.

Moreover, Rogan and Dave Portnoy, the creator of Barstool Sports also touched upon Tate’s Twitter feud with Greta Thunberg. To Rogan, the fact that Andrew started ‘beefing’ with a 19-year-old on Twitter and then got arrested shortly after is ‘hilarious’. Additionally, Joe also lauded Greta’s response to Tate’s arrest as a candidate for “Tweet of the Year”.

Although he wants the controversial influencer to be imprisoned if guilty, Joe strictly condemns the people who are rooting for Tate’s demise. Speaking about such people, Rogan explains, “It means that if it’s true, they want him to be punished. But hoping that it is true when it isn’t true is not good either. It’s horrible because you were hoping for people to be victimized.”

Currently, Andrew along with his brother and other detainees are being held for a 30-day period. As such, Tate and others will remain in an undisclosed detention center in Romania until investigations continue. Reports indicate, that Tate may face 15-20 years in prison if found guilty.

This leaves the question, do you think the Top G is innocent? Are you a fan of his persona? Leave your thoughts in the comments below.