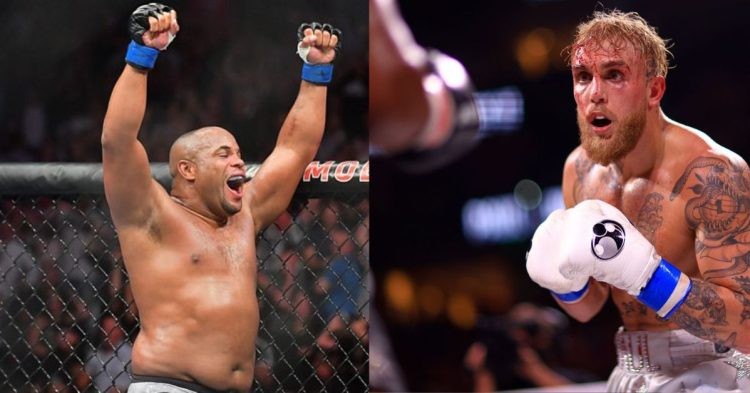 Daniel Cormier might be retired from competing but he has not retired from commentating. The former double champion is one of the constant official commentators of the sport. He is attached to the sport so dearly, that not only does he has his own talk show on ESPN, but he also runs a youtube Channel in which he gives his takes on usual MMA affairs.

Recently, he uploaded a video on his Youtube channel where he shared his thoughts on the newly set bout between Jake Paul and Anderson Silva. Recently Ariel Helwani announced that Paul will face off in a boxing contest versus legendary MMA fighter and former UFC middleweight champion Silva in October has not yet been finalised. Sources indicate that the fight will happen on October 29.

Fight would be contested at 185 pounds, I’m told. Developing story. We should know more by the end of the week.

Hearing upon this Cormier stated, “Not to take anything away from Jake Paul, But what Anderson Silva did, at his age, at the competition he has fought, has out-weight anything Paul has ever done. It all lies in one person.”

Cormier then touched upon the fact that initially, when the bout was reported, Paul was the favourite on the betting lines. As soon as the money flew in on the underdog, the lines changed and Silva ended up as the -105 favourite. But the fact the Anderson even opened up as the underdog disgusted Cormier.

He stated, “So now when you hear, he opens as the underdog to Jake Paul? Come on. You gotta be kidding me, This is Anderson Silva we talking about.” He then later gave props to Paul the brief career he has had in boxing. Also, gave credit to him for making his boxing events successful in terms of pay-per-view.

“The problem child” stood 6 feet 1 inch tall and weighed about 190 pounds at his last competition. Silva weighed 193.5 pounds and was 6 feet 1 inches tall when he last competed inside a boxing ring in an exhibition contest against Bruno Machado. As far as boxing experience is concerned, on paper both have around the same number of fights. However, Silva is considered as one of the best strikers to ever grace the octagon. The match-up will be interesting to say the least.

On Twitter, Daniel Cormier publicly expressed his disdain of Paul’s actions and cautioned the YouTuber to stay away from opponents like Woodley back in 2021. The two even shared a tussle on twitter. Paul’s presence at UFC 261 caused Cormier and Paul’s beef to escalate. When ‘DC’ saw this, he became alarmed and ran over to Paul, yelling at the 24-year-old for calling him out on social media.

However, it’s been a while since the incident has took place and it seems like both of them have moved on as “DC” was being logical in his assessment of Paul. However, one can only speculate unless something else happens. Till then, Fans can enjoy the show.