Tyron Woodley's Walkout Song: List of Songs Tyron Woodley Has Walked Out to in His Career 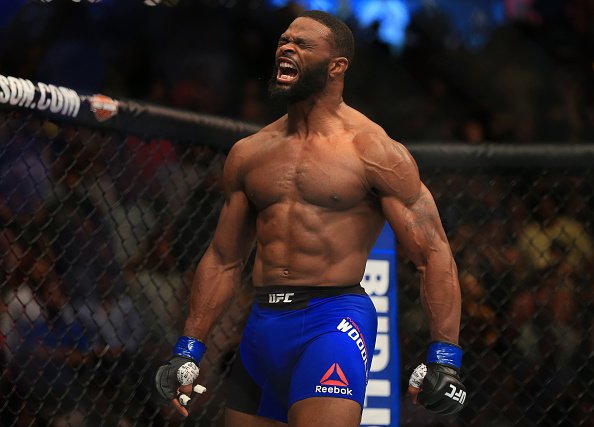 Tyron Woodley is widely viewed as one of the best welterweight fighters to have stepped inside the octagon in UFC. Owing to the fact, that he is a former UFC welterweight Champion and during his reign, he has defeated renowned names like Robbie Lawler, Stephen Thompson, Darren Till and  Demian Maia.

Moreover, his ability to knockout fighters at any given moment along with his good grappling skills made Woodley an elite welterweight fighter. However, let’s move away forward and take a look at the songs that T-Wood has walked out to in his UFC career.

Tyron Woodley went head to head against UFC legend Robbie Lawler for the welterweight belt at UFC 201 in 2016. He walked out to this song named King without a Crown by Thi’sl in this contest.

Woodley did complete justice to this song as he took inspiration and delivered a king like performance against a legendary fighter. He produced a devastating knockout in the second minute of the fight to win the welterweight belt against Robbie Lawler.

Tyron Woodley vs Darren Till: I ain’t turning back – Thi’sl Feat Flame

Tyron Woodley loves this rap song called I ain’t turning back which is composed by an underground rap artist called Thi’sl. As a result, he has walked out to this song on numerous occasions in the UFC. Woodley used this song as he entered into the octagon to defend his welterweight against the British superstar Darren Till at UFC 228 in 2018

The Chosen One displayed an amazing performance and derailed the hype train of the upcoming star Darren Till in this fight. He submitted Till via D’arce choke in the second round of the contest to make his fourth title defense.

Tyron Woodley vs Kamaru Usman – I’ll beat yo a**

Tyron Woodley released his rap song I’ll beat yo ass featuring Wiz Khalifa in 2018. Subsequently, he walked out to his own rap song when he stepped in to defend his belt against Kamaru Usman at UFC 235 in 2019. However, the Chosen One was not able to execute as mentioned in the chorus of his walkout song.

Because the Nigerian Nightmare showcased his excellent ground game as well as striking skills to dominate all five rounds of the contest. Following this terrific display, Usman won the fight against Woodley via unanimous decision to become the new welterweight champion.

After losing the welterweight belt to Kamaru Usman, Tyron Woodley faced Gilbert Burns in his next fight a year later at UFC Fight Night. He used two songs Revenge by Joyner Lucas along with Motivate and Hussle by legendary rapper Nipsey Hussle in his entrance against Gilbert Burns.

The Brazilian overwhelmed Woodley in this bout. Owing to the fact, he landed 83 strikes to Tyron’s 28 strikes over five rounds of the fight. Moreover, he controlled T-wood for 8 minutes on the ground. As a result, Burns was declared the winner via unanimous decision.