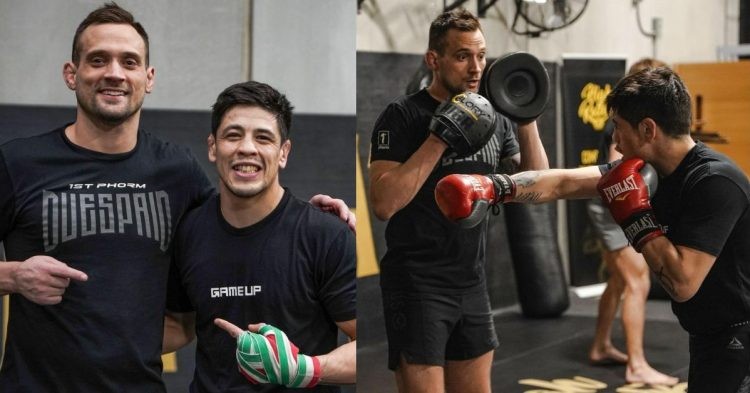 Brandon Moreno will return to action this weekend to take on Kai Kara France in a five-round co-main event bout that will take place at the T-Mobile Arena in Las Vegas. There will be a lot at stake for the Mexican fighter as the interim flyweight title will be on the line at UFC 277.

The Assassin Baby last fought against old adversary Deiveson Figueiredo in a trilogy bout on January 22 where he had to defend his flyweight title. However, Moreno failed to defend his crown as Figueiredo avenged his rematch loss in what was a close battle that went to the distance.

Surprisingly, after losing the title to Deus De Guerra at UFC 270, Brandon Moreno made a decision to part ways with his longtime team Entram Gym. He announced this switch up two months after the loss in March and started training at the Glory MMA & Fitness gym. The Mexican flyweight is currently training under the tutelage of coach James Krause.

Along with coaching several fighters including Brandon Moreno, Krause also used to compete in the lightweight division of UFC. He last fought in 2020 against Claudio Silva where he picked up a unanimous decision win. The veteran lightweight has squared off against the likes of Jorge Masvidal, Donald Cerrone and many top names during his time in the UFC.

Besides, James Krause has helped several fighters get into the UFC and honed their fighting skills. Julian Marquez is one great example who has flourished under the coaching of Krause. It would be interesting to see whether there are any changes and improvement in Moreno’s fighting skills as he takes on Kai Kara France at UFC 277.

Brandon Moreno has been fighting under the guidance of Raul Arivizu since he was 16-17 years old. The Mexican flyweight was training at the Entram gym before the beginning of his UFC career. Moreno has fought 26 times under the guidance of Raul and has achieved some mind-boggling feats like winning the UFC flyweight belt and many championships in other organizations.

Hence the decision of The Assassin Baby might come as a surprise to many as fans weren’t expecting him to switch sides just after losing to Deiveson Figueiredo in a close battle. However, Moreno felt that it was the perfect time to close the old chapter and find a new team because he wanted to get out of his comfort zone.

The Mexican flyweight confirmed that there was no bad blood with his sparring partners or his coach Raul Arivizu and went on to explain how he wanted a change in the environment. Only time will tell whether Moreno has made the right move or not because it’s not easy to adapt to a new team and partners after training with the same coach for almost ten years.