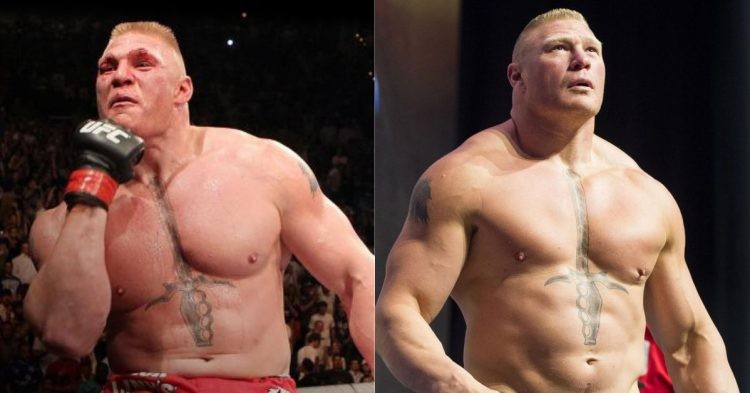 Brock Lesnar is one of the UFC's highest paid athletes. (Credits: YouTube)

Brock Lesnar is one of the biggest UFC and combat sports stars ever. Regarded as one of the most fierce fighters in the toughest division of the UFC, Lesnar made a lasting impact on fans. Notably, Lesnar’s biggest achievement came when he won the UFC Heavyweight Championship and became one of the quickest fighters to do so.

Prior to his UFC debut, Lesnar made his name known as one of the most dangerous fighters in the WWE. Numerous big rivalries and multiple runs as a Champion in the WWE solidified Lesnar’s reputation as a top fighter.

Making his way to the UFC, Lesnar made his debut against Frank Mir at UFC 81: Breaking Point. Although “The Beast” lost the fight, he was offered another contract and made good on it with his victory against Heath Herring at UFC 87.

Lesnar made his debut against Frank Mir at UFC 81, on a one-fight contract. Despite losing the fight, Brock pocketed a reported $250,000 from the fight. This also saw him get a new extended contract as well.

In his next fight against Heath Herring at UFC 87, Brock scored an early knockdown and dominated the fight, winning via unanimous decision. For his win, Lesnar pocketed $450,000, which included $250,000 to show and $200,000 to win.

Further, Lesnar took on Randy Couture at UFC 91, for the UFC Heavyweight championship. Lesnar displayed great takedown defense and won the bout scoring a technical knockout on Couture. Yet again, Lesnar pocketed $450,000, which included $250,000 to show and $200,000 to win.

Next, Lesnar would go on to make his first title defense in a rematch against Frank Mir at UFC 100. Here, Lesnar was able to exact revenge, winning the fight via technical knockout in round 2. Lesnar was awarded $400,000 for the fight.

Lesnar would then go on to make yet another title defense against Shane Carwin. As such, Lesnar took home $475,000, which included $400,000 to show and a $75,000 Submission of the Night bonus. In his next two fights, Lesnar would lose to Cain Velasquez and Alistair Overeem, making $400,000 in each outing.

According to Bleacher Report, former UFC and WWE champ Brock Lesnar had a fight purse of 2.5 million for UFC 200. To date, it remains one of the highest payouts in the UFC, topped only by the likes of Ronda Rousey and Conor McGregor. According to sources, the fight allowed Lesnar to make an entire year of WWE salary in one night.

Unfortunately, Nevada State Athletic Commission (NSAC) confirmed that Lesnar failed his drug test after the fight. As a result, Lesnar was fined $250,000 and his victory was overturned into a no-contest. Thus this leaves Lesnar’s total UFC career earnings at a whopping $5,295,000.

Thus, it makes Lesnar one of the highest-paid heavyweights in UFC history. Following his second retirement, there were also teases of a potential fight with Daniel Cormier and even Jon Jones. Although we may not witness it inside the Octagon, it will surely be worth the watch.