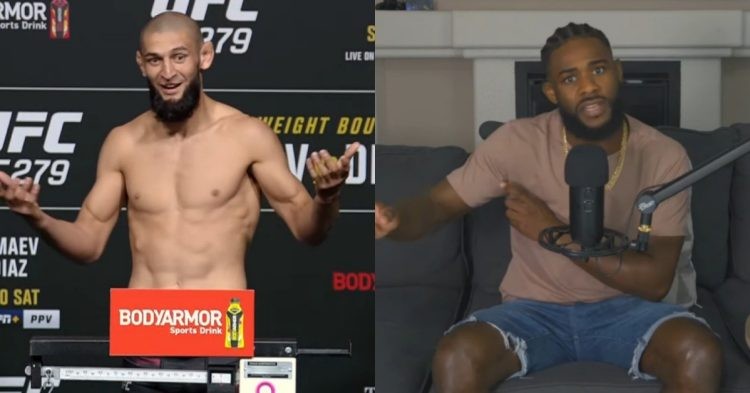 Khamzat Chimaev is now officially out of the UFC 279 main event. Something seemed off with Khamzat throughout the entire fight week as he kept getting into altercations.

But the most disrupting incident took place during the official weigh-ins as Chimaev came in at 178.5lbs. Missing weight for the main event fight is not good, but missing weight by 7.5lbs is worse!

However, Chimaev did not seem even slightly bothered about the weight miss. Instead, he posed on the scale with a smile on his face and stated that the weight miss was not too bad.

But UFC Bantamweight Champion Aljamain Sterling smells a conspiracy! In a recent video, he questioned Chimaev’s demeanour on the scale and wondered whether the event was planned or not. He pointed out that Khamzat did not seem drained at all from a bad weight cut.

“Was this, like, planned? Doesn’t look like you were trying to get down where you look drained. When you see most people that miss weight, they usually look drained and they’re usually disappointed after they don’t make weight. Right?”

“Khamzat looks ripped, doesn’t look drawn out in the face, smiling, misses weight, gives the finger, the bird and walks off and says pretty much, before he walked off, he goes, ‘That’s not that bad!’ And I’m just like, I don’t understand.” (h/t via @funkmastermma)

After such a big miss on the scales, everyone wondered what went wrong for Khamzat Chimaev. Ariel Helwani tweeted that there were rumours of a health-related issue. The Borz confirmed that ahead of the ceremonial weigh-ins for the event later in the night. He spoke to Megan Olivi backstage to shed some light on what really happened.

“I don’t know, something was wrong with my (body), I wanna continues. Comes some doctors, somebody called him. I don’t know who was that. Then they stopped… I couldn’t do something. I said I can do it, just wait. That was like 4 o’clock at night, so that’s a lot of time. They didn’t let me, no.”

However, he did not clarify what exactly made the doctors stop Khamzat from cutting the weight. Because of his weight-cut issue, the entire event was in jeopardy at one point. But fortunately, the UFC was able to shuffle the fighters around and make it work.

The talking will be done in the Octagon tomorrow night…🤬 #UFC279 pic.twitter.com/qT1UEUVLwf

Instead of Khamzat, Nate Diaz will now fight Tony Ferguson in the main event of the night. Whereas Khamzat Chimaev will be fighting Kevin Holland in the co-main event. The bout is scheduled for full 5 rounds. Holland’s original opponent, Daniel Rodriguez, will now go up against Tony’s original opponent, Li Jingliang.

Although the original card is not the same anymore, by all means, the updated one looks much better with more competitive fights.