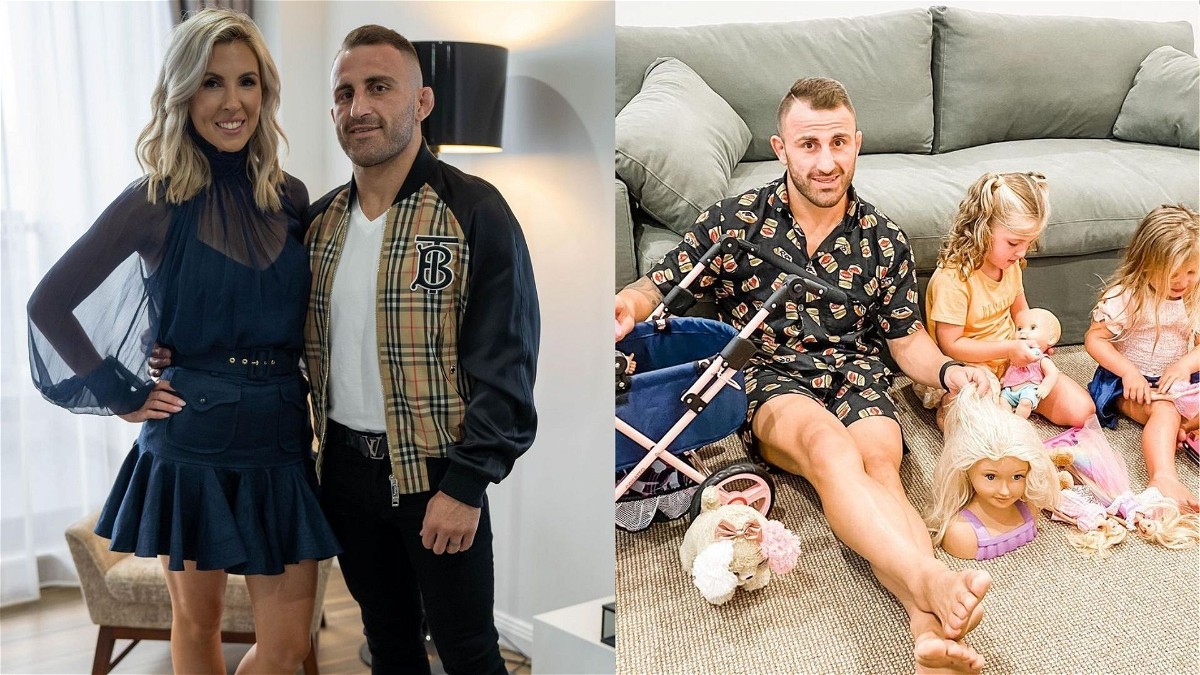 Alexander Volkanovski and his wife

One of the greatest featherweight champions of all time, Alexander Volkanovski is on his way to cement his legacy as one of the best to ever do it.

Representing Australia in the world of mixed martial arts, Alexander Volkanovski has made a huge impact by winning the UFC featherweight title.

He is unbeaten in his UFC career so far with 9 wins and has two wins over arguably the greatest featherweight of all time, Max Holloway. Besides that, he has wins over legends such as Jose Aldo and Chad Mendes, which certainly makes him one of the best to ever do it.

Besides being a world champion in the octagon Alexander Vokanovski is a ideal father and a loving husband. So let’s have a look at a completely different side of Volkanovski, which is fun and exciting.

The UFC featherweight champion is married to Emma Volkanovski. The couple has two daughters, Airlie and Ariana Volkanovski. Volkanovski and Emma got married back in 2015.

Emma Volkanovski is a fitness freak and has a Bsc. in psychology from the University of Sydney. Emma has three sisters coming from a modest background.

UFC featherweight champion, Alexander Volkanovski has two daughters Airlie and Ariana Volkanovski. It must be said that Volkanovski is a class act both in and outside the octagon. He is a true ambassador of the sports of MMA as he is the perfect example of a great champion and a great person.

From his social media, it’s obvious that Volkanovski makes every effort to be a good father and husband. Besides being a fighter, Alexander Volkanovski is also passionate about cooking and frequently posts recipes for some delicious cuisines. Moreover, he also makes sure to spend quality time with his family despite the busy schedule of a UFC champion.

Volkanovski has even penned a children’s book to teach kids discipline, right morals, and work ethic. From a Rugby player to the UFC champion, Volkanovski has had quite a journey so far and he wishes to share it with the young generation who takes inspiration from him.

Talking about the motive behind writing this children’s story, Alexander Volkanovski said:

“A lot of parents will come up to me and say: ‘My kid looks up to you. This book is something I can be proud of and is what I’m all about. If I can give back to kids it means a lot to me.”

How did Alexander Volkanovski start his MMA career?

Alexander Volkanovski started MMA at an age of 23. Though he started wrestling at the early age of 12 he pursued his dream of being a Rugby player in the beginning.

Volkanovski made a huge impact on his Rugby team the Warilla Gorillas with stellar performances. However, he quit his Rugby career and started his MMA career at 23 years of age.

In the beginning, Volkanovski was over 210 lbs. In fact, he fought at welterweight on his pro-MMA debut and suffered a TKO defeat. However, Volkanovski made an insane physical transformation and started competing in the featherweight division and the rest is history.

Alexander Volkanovski is on an incredible winning streak with 20 wins in the featherweight division. And he is the best featherweight in the world at the moment.