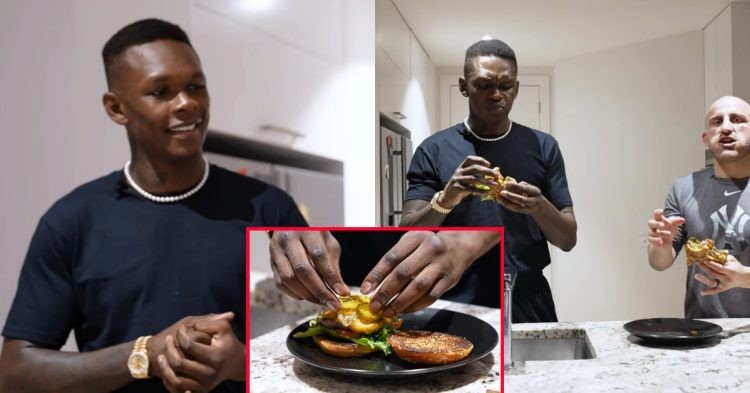 UFC champions Israel Adesanya and Alexander Volkanovski got together for a cooking lesson video ahead of UFC 276. The featherweight champ invited Adesanya on his YouTube channel where the pair made a delicious Aussie-style Kangaroo Burger and teased the fans’ appetite for the food and the upcoming super-card.

Audiences are aware of the magic that both Izzy and Alex can create inside the Octagon. But, as it turns out, they quite the masters in the kitchen as well. Alex made the burger without much of a fuss with minimum ingredients. Two meat patties, burger buns, fried onion, slices of tomatoes, lettuce, and two pieces of pickle each with a pinch of salt and the food was ready!

By the reactions from both the fighters, it tasted just as good as it looked! Alexander The Great stated that he was in New Zealand at the time of the shoot. Both Izzy and Volk are in the middle of their respective fight camps in New Zealand.

They are both a part of City Kickboxing which is situated in the country. Fighters often share footages that are either fights related or training related. Hence it was nice to see two elite competitors at the height of their powers, showing the other side of their personalities.

UFC 276 is set to be the biggest fight card of 2022 so far. Not only is it the international fight week event, but the card will also feature two of the most active champions on the roster currently. While Israel Adesanya will fight Jared Cannonier in the main event. the co-main will feature his teammate Alexander Volkanovski vs Max Holloway 3.

The trilogy bout was originally set for UFC 273. But an injury to the challenger delayed the bout and Alex went on to defend his title against The Korean Zombie instead.

The event is also significant from another point of view as well. Both champions in the main event fights are from the Oceania continent. Volkanovski is from Australia and although Izzy was born in Nigeria, he is currently a citizen of New Zealand. That did not escape the 185lbs champion as Adesanya commented,

“This is huge for the Oceania region. Like dude, this like, f**k, look at me. I’m starting to get chills even thinking about it. Years, 50 years down the line, we are gonna talk about this shit forever.”

Australia and New Zealand have produced a lot of superstars in recent years who have taken the world of MMA by storm. Fighters like Robert Whittaker, Dan Hooker, Brad Riddle, and Tai Tuivasa have made crucial contributions in making the sport even more popular in New Zealand and the land down under.

UFC 276 is set to go down on July 2nd inside the T-Mobile Arena in Las Vegas, Nevada. Aside from the title fights, it also features important fights such as Sean O’Malley vs Pedro Munhoz and Sean Strickland vs Alex Pereira. Former Women’s Bantamweight Champion Miesha Tate will also be a part of the card. She will fight Lauren Murphy in the flyweight division.