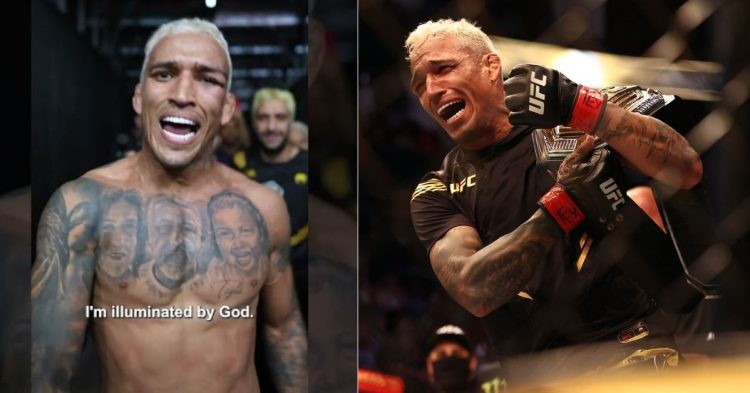 Less than five years ago, Charles Oliveira had just a single win in his last four fights. He was submitted twice and stopped by a barrage of punches by Paul Felder. All these years later, Oliveira is now the greatest lightweight fighter of all time, with wins over the likes of Dustin Poirier, Justin Gaethje, Michael Chandler, and Tony Ferguson among others to cement his legacy as one of the pound-for-pound best.

Charles Oliveira believes he was “chosen to talk about God,” and that he is “illuminated by God.” Oliveira’s faith has taken him to greater heights and his belief in God continues to empower him whenever adversity strikes his door. Charles “Do Bronx” Oliveira is truly a special fighter.

Charles Oliveira is a Christian by religion. “Faith can move mountains. If you believe and have faith, you will climb this building without any equipment. You will do it. It can cure diseases, it can give you things you didn’t even imagine you could have. You experience things you never thought you would. That’s faith.” Oliveira says.

He is religious and credits God for everything he has achieved. Oliveira believes in miracles because his life has been nothing less than one. Coming from a Brazilian ethnic background, Do Bronx has become a huge name in the world of combat sports.

Oliveira was just seven years old when the Doctors broke the unfortunate news to his family that he was suffering from rheumatism. It is an autoimmune and inflammatory disease that attacks your bones, particularly the joints. Doctors told Oliveira’s family that he wouldn’t be able to walk. This was more than twenty years ago.