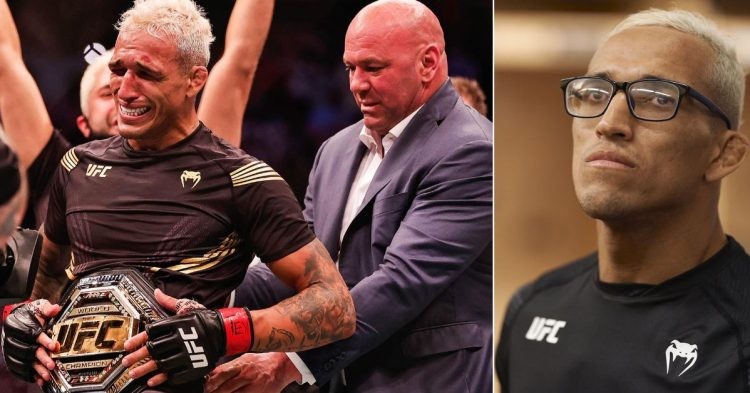 While the rumors of Charles Oliveira not being able to see without his glasses were rife for quite some time, the UFC lightweight confirmed the same following his first title defense where he submitted Dustin Poirier in the second round to defend his gold.

Charles Oliveira revealed that he is almost blind without his glasses and even said he sees three fighters while he is inside the Octagon. It’s hard to imagine how despite the odds, Oliveira has managed to rack in a resume that boasts wins over the likes of Justin Gaethje, Michael Chandler, Tony Ferguson, Dustin Poirier, Kevin Lee, and Jeremy Stephens among others.

“I see three [faces]. If I hit the middle one, that’s fine,” said Oliveira (h/t MMAMania). “I think keep this same technique. Three guys for me is perfect. If I hit the one in the middle, it’s good. I’ll tell you the truth, I’m a guy who has a lot of faith in God and it’s no joke. If I take my glasses off, I only see 50 percent but it never hindered me in a fight.” Oliveira said.

Needless to say, Oliveira doesn’t see this as an excuse and believes he is “illuminated by God” to achieve the incredible feats he has achieved. Moreover, not being able to see without his glasses is history now as the Do Bronx recently revealed that he has gone through vision correction surgery ahead of his fight against Islam Makhachev at UFC 280 for the undisputed lightweight championship.

On a lighter note, Oliveira revealed how he likes to walk in glasses to look “nerdy”. Almost his entire career without proper eyesight and Oliveira has managed to rack in a resume that speaks volumes about his credentials as a mixed martial artist. Most number of finishes in UFC history, the most number of submissions, and the most number of performance bonuses, Oliveira is a force to be reckoned with inside the UFC Octagon.

“Sometimes I like to walk in with glasses to look harmless and more nerdy than I already am. And when I take my glasses off, it’s normal, I can see my opponent on the other side. God blesses me so much that I can see normal. But on the streets, if I take them off, I’m blind.”

“I had the surgery, and my eyes are 100 percent perfect,” Oliveira said ahead of UFC 280, speaking through a translator. “I can see everything now.”

A perfect vision Charles Oliveira is confident he will knock Islam Makhachev out in the first round come UFC 280. The Brazilian fighter has triumphed over adversities throughout his career.

He has been branded a “quitter” by several fighters and has been an underdog in almost all his UFC fights, but the submission specialist continues to pave his way and has already cemented his legacy as one of the greatest mixed martial artists of all time.