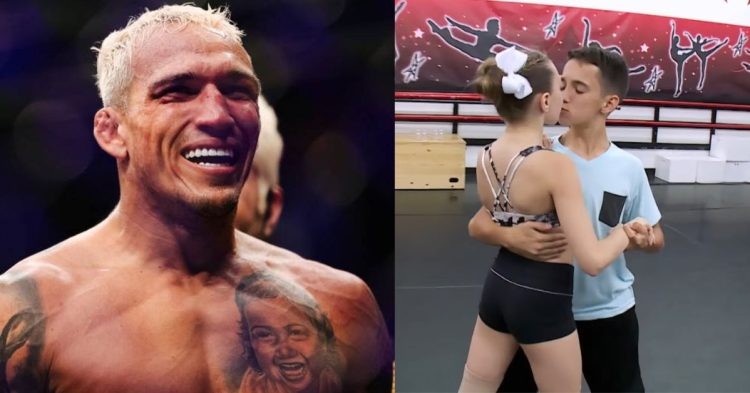 Charles Oliveira will make his return inside the octagon this weekend on October 22nd as he takes on Islam Makhachev in five-round main event bout for the vacant lightweight title at UFC 280. This highly anticipated title fight will take place at the Etihad Arena in Saudia Arabia, UAE.

Ahead of this big matchup, an old video has surfaced online of a boy competing in a reality TV show called Dance Moms looked like Charles Oliveira. Interestingly, in that clip, the boy named Gino kissed his partner Maddie at the end of their rehearsal. This short video broke social media as it got millions of views .

Subsequently, many pages on YouTube and Instagram have made memes of this clip and combined it with before and after of Do Bronx. After seeing the clip, many fans assumed that Oliveira took part in Dance Mom’s. However, the former UFC lightweight champion had no involvement with the dance show.

Moreover, Gino who looks like Charles Oliveira was 13 years old when he participated in the popular reality show. Do Bronx who hails from Brazil likes to dance and a few of his celebrations are an indication towards his interest in dancing.

However, the Brazilian lightweight’s main focus has always been to win the lightweight title and become the best fighter in the UFC. Maybe after Do Bronx decides to retire from the sport we might see him participating in a dance reality show.

Who is Gino Cosculluela the look-alike of Charles Oliveira?

Gina Cosculluela was born on October 3rd, 2000 in Miami, Florida. His mother’s name is Barbara Anton Suarez and father’s name is Mickey Cosculluela. Gina has three siblings – Evan, Kevin and Angela. There isn’t much information available regarding his school and college life.

He first came into spotlight in 2012 after participating in a dance reality show called Dance Attack. Thereafter Gino along with his two siblings Kevin and Angela got their big break as a dance trio group in the popular show America’s Got Talent.

Unfortunately, the trio couldn’t get past the Vegas round and were eliminated from the show. Following his short stint in America’s Got Talent, Gino took part in the third and fourth season of Dance Moms.

He also made a guest appearance in the sixth season of the show and subsequently for his brilliant performances he won the Best teen dancer of the year award in 2016.

Gino Cosculluela also participated in So You Think You Can Dance season 16 in 2019 and the teenager claimed the third overall spot. The American dancer also likes to sing and has recently released his music album.