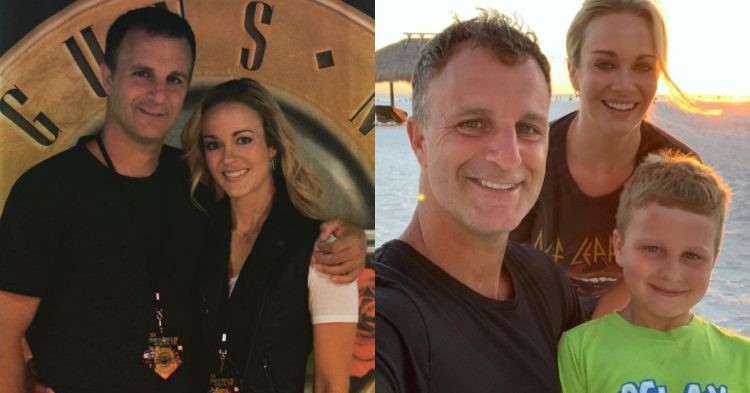 The world of Mixed Martial Arts (MMA) was rocked earlier when Megan Anderson blasted James Krause on Twitter. Her first accusation was that James did not give her the proper guidance leading upto her title fight against Amanda Nunes at UFC 259. However, she sent the internet into a frenzy with claims that James Krause was having an affair with Laura Sanko.

For fans who are wondering who Laura Sanko is, she is a UFC employee and a TV presenter. She often appears on the preshows such as the weight-in shows before the big PPV events. She has a great presence on television and does a great job. Even UFC President Dana White stated that Sanko may become the first female UFC commentator. She finally made her commentary debut during the 5th season of Dana White’s Contender Series.

The spectators mostly know her for her role as a UFC presenter and backstage interviewer. However, not many know that she was a professional fighter as well. Laura had an amateur record of 4-1 before beating Cassie Robb in her only MMA bout. Her only pro bout took place on 5th January 2013. But, she left her fighting career behind and was on track to become a successful broadcaster.

However, this recent controversy made the fans see her in a different light. As Megan Anderson alleged, Laura had an extra-marital affair with ex-UFC fighter James Krause. James is married to Shynel Krause. But Sanko herself is married to Nathan Sanko and has been with him since 2010.

Although Nathan and Laura started dating in 2006, they did not get married until September 2012. Hence, the couple has been in a relationship for over a decade and has a son named Burke Sanko. Laura has kept her private life out of the limelight very well till now. However, the recent allegations about her having an affair, are making the fans ask, who is Laura Sanko’s husband Nathan Sanko?

The information regarding Nathan Sanko is quite scarce. However, it is reported that Nathan was an economics student from the University of Arkansas. Nathan was a part of many businesses over the years. He was part of Back 2 Basics of Indiana, LLC, where he was involved from 1997-2005. He is also the co-founder and CEO of No Limit Safety, LLC, No Limit Wheels, LLC, and Leggera Techologies, LLC.

Nathan is the owner of Back to Basics Beef, LLC. Other than that, he is a board member and early investor in Movista since 2010. Similar to her partner, Laura also tried out her hands in the world of business. According to her LinkedIn profile, Laura completed her education at William Jewel College and has a degree in BBA, Entrepreneurship/Entrepreneurial Studies.