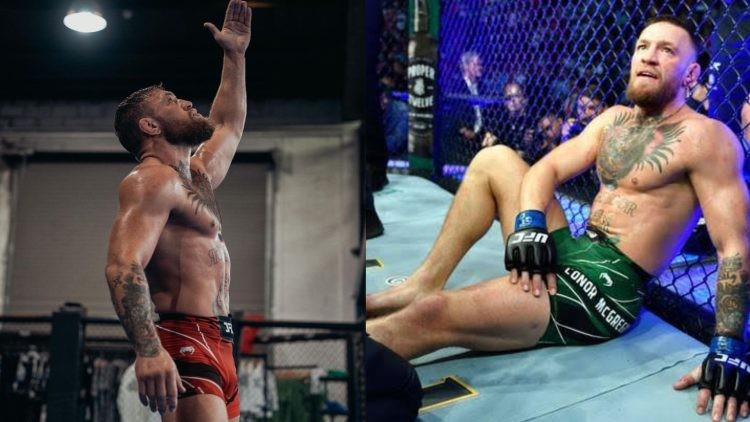 Conor McGregor is unarguably the biggest superstar in the history of UFC. The Irishman had single-handedly turned the stakes of UFC by bringing millions of fans into the sport. His energetic and sometimes cocky attitude makes him extremely entertaining to watch and the fighter knows how to utilise it.

The former UFC double champion has earned a lot of money in these last few years but unfortunately, his professional career hasn’t been that well. Mcgregor has lost thrice in his last four Octagon appearances and is currently in his career lowest. His last win was against Donald Cerrone which took place at UFC 246. Last year in July, McGregor locked horns with Dustin Poirier for their trilogy fight at UFC 264. During that fight, ‘The Notorious’ suffered a horrific leg injury and snapped his leg into two pieces.The fight was stopped and Mcgregor was taken away on a stretcher.

Since then the fighter has been out of action and recovering from that serious injury. It took McGregor months to recover from the broken leg after getting surgery. After being able to walk and start training, McGregor took this opportunity to heal his leg as well as bulk up. McGregor shared pictures new physique in which the fighter looked very huge.

Since then the fighter has been out of action and recovering from that serious injury. It took McGregor months to recover from the broken leg after getting surgery. After being able to walk and start training, McGregor took this opportunity to heal his leg as well as bulk up. McGregor shared pictures new physique in which the fighter looked very huge.

Just out of the surgery room guys! Surgery went excellent! Feeling tremendous! 6 weeks on crutch and we build back! Let’s go! God bless 🙏

After that Mcgregor also shared a few of his training clips in which the fighter can be seen boxing and conditioning his body. In these clips, McGregor was looking sharp and good on his feet. Many fans were excited to see McGregor finally being able to move properly and train. This started several assimilations regarding his comeback to the octagon.

I’m gonna break a head with these. Add it to the list of heads. pic.twitter.com/w3q3sm9a7s

McGregor’s leg injury was very similar to the one Anderson Silva suffered during his fight against Chris Weidman at UFC 168 in 2013. In the second round of the fight, Silva threw a nasty kick which was checked by Weidman. The impact was massive and it broke Silva’s tibia and fibula.

Silva underwent surgery and it took him around 2 years to make his comeback. Anderson fully recovered in 2015 and fought Nick Diaz at UFC 183. Silva won the fight via unanimous decision but was found positive for illegal drugs. One year later,  Silva fought Michael Bisping and lost. After that, the ‘ Spider ‘ was never the same and finally retired in 2020.

It took Silva two years to recover from that injury and had to take drugs in order to heal. However, McGregor is already looking good after one year of recovery and can make his comeback later this year. It’s important to consider that both McGregor and Silva had similar injuries but there is such a difference in the recovery period. One of the reasons might be that McGregor worked with a better team of doctors who helped him recover fast. In this scenario, McGregor worked with Elite Orthosport which helped him to recover this quick.

Both the incidents are around a decade apart and it might be possible that currently there are better ways to deal with injuries like this more efficiently.

Since McGregor’s recovery is going very well, it is pretty obvious for fight fans to expect his return anytime soon. The fighter has also shown his interest to get back into the octagon. It will most probably take place at the end of this year or the beginning of 2023.

UFC president Dana White recently in an interview with TMZ Sports , revealed that he thinks Mcgregor might fight soon. He said :

“I think he’s getting better. He’s starting to ramp up his training, and I’m hoping the end of this year, early next year.”

McGregor being a superstar he is can never run out of opponents. Everybody wants to fight McGregor for that big paycheck. Currently, Charles Oliveira, Michael Chandler and Kamaru Usman are some of the potential fighters who can fight McGregor in his comeback.