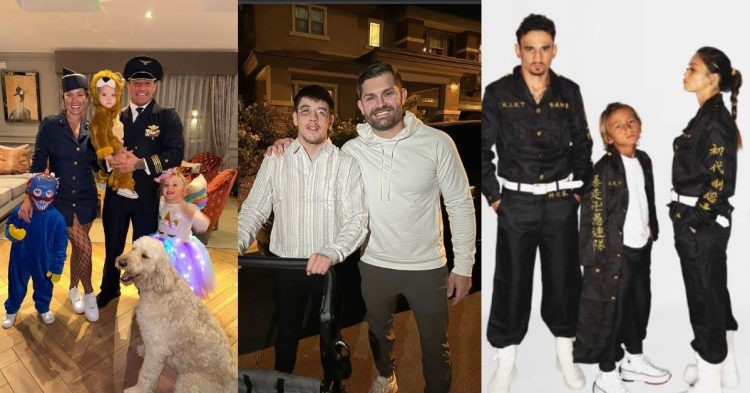 UFC fighters came up with some unique ideas for this year’s Halloween and celebrated the holiday with their families. Some decorated themselves with creative costumes and spooky outfits while others showed low-budget fits.

Check out Max Holloway and his family rocking the Jujutsu Kaisen outfit. He posted on Instagram with captions: “Resonance! Happy Halloween fam. Stay safe out there!”

Cub Swanson and his family dressed up as Power Rangers for this year. Swanson wrote: “Happy Halloween from the Mighty Morphin Power Swansons.”

Former middleweight champion Robert Whittaker showed off his hilarious costumes. Whittaker dressed up as a low-budget Spiderman, Ninja Turtle, and Uncle Sam, while his family can be seen wearing Toystory fits in the fourth slide. He posted on his Instagram with captions: “Really scraping the barrel this year…happy Halloween.”

UFC’s biggest superstar Conor McGregor showed up as a famous character for this year’s Halloween. Some people thought McGregor dressed up as a simple pilot. ‘The Notorious’ looked almost unrecognizable without his beard. One fan wrote sarcastically: “no beard Conor is crazy.”

McGregor’s girlfriend, Dee Devlin dressed up as a stewardess. However, a post from McGregor proves that he decided to portray Frank Abagnale from the famous Hollywood classic, Catch Me If You Can. In one post he wrote: “The sky is the limit, come fly with me.” In another post McGregor posted his costume with captions: “Frank Abagnale. #catchmeifyoucan”

Looking at the fans’ reactions, it seems like Holloway, McGregor, and Moreno might have a competition here. However, it looks like Max won the competition with that slick Tokyo Revengers outfit. One fan replied: “Max easily wins this.” While another wrote: “The Holloways always kill it on Halloween.”

Other fans thought Moreno looked best in his costume. One user replied: “Moreno is the Mexican McLovin.” Fans were confused about determining Whittaker’s costume. One fan wrote: “What is rob supposed to be?”