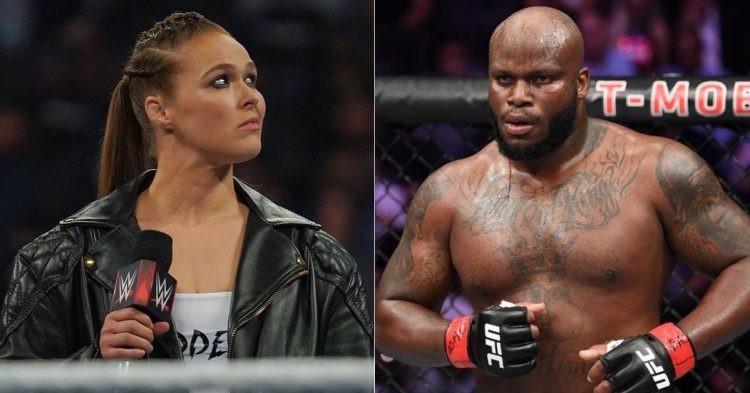 Derrick Lewis may have put himself in trouble yet against after passing comments on Ronda Rousey ahead of UFC 277. The Black Beast will take on Sergei Pavlovich on the main card of UFC 277. The former two-time title challenger sat down with Daniel Cormier ahead of UFC 277, and what went down is certain to make Lewis’ wife April Davis angry.

Recently, Cormier sat down with Ronda Rousey and the former two-division champion was witty to mention the same to Derrick Lewis, who had this to say in response. “She asked about me?” Lewis asked, “She didn’t ask about you.” Cormier responded.

The hilarious stories involving Derrick Lewis and Ronda Rousey are many. It all started with Derrick Lewis calling out Rousey following his emphatic win over Travis Browne. Lewis took to the microphone in a scathing attack on Travis Browne and followed it up with a comment that has made it so many reels and memes over the past few years.

“Where’s Ronda Rousey’s fine a** at?” Lewis said in the post-fight Octagon interview. The next several months saw Lewis and Browne trade barbs at each other, with Browne’s wife Ronda Rousey becoming the center of attraction.

Earlier, Derrick Lewis had revealed that his wife April Davis banned him from sex following his remarks on Ronda Rousey. The Black Beast responded to her wife with a funny accusation of her own, “She could talk about Tupac all day and day long, but if I say anything about Ronda, she gets mad.”

In the past as well, Lewis has made jokes on Rousey, taking to social media on several occasions to take a jibe. Needless to say, it was based on good humor, and fans have appreciated the funny side of Derrick Lewis, who is quite intimidating inside the Octagon, to say the least.