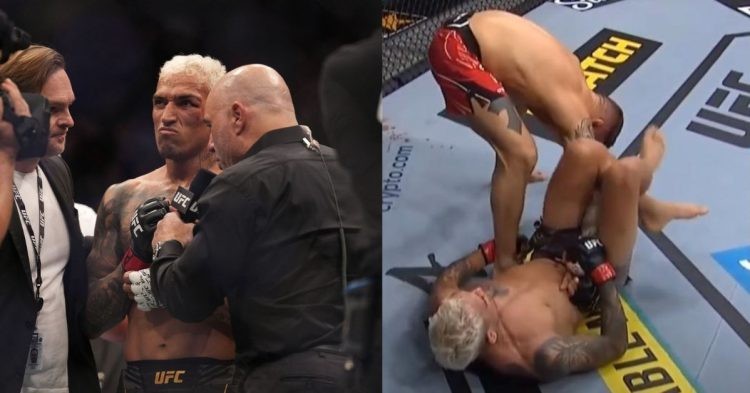 Charles Oliveira has made a lot of fans through his incredible rise in the lightweight division. After a mediocre record in the featherweight division, do Bronx moved up to lightweight and was able to achieve an 11-fight win streak with 10 finishes.

Charles Oliveira has beaten multiple interim champions such as Dustin Poirier, Tony Ferguson, and Justin Gaethje. Oliveira is now notorious for getting hurt early in the round and making a comeback to win the fight.

And that’s what happened when he took on Dustin Poirier at UFC 269. Going into the fight, Oliveira was a huge underdog. And after the first round, many fans were confident Poirier would finish Oliveira to become the champion.

But, after a controversial grappling exchange, Poirier found himself on his back with do Bronx landing vicious elbows from the top. To achieve this position, Oliveira grabbed Poirier’s gloves and forced him to do a Granby roll, which cost the Diamond dearly.

Even the commentary team for the event, Joe Rogan, Daniel Cormier, and Jon Anik pointed out the fact that Oliveira cheated to achieve a dominant position.

On the mic, Joe Rogan stated: “But he is holding on to the glove in an illegal way. See the way he is pulling the glove like that. He cuffed his finger underneath the glove to achieve that position.”

Joe Rogan is a huge fan of Charles Oliveira and his accomplishments in the UFC. However, Rogan did not seem pleased with Oliveira grabbing the gloves of Poirier in round number 2.

Had Oliveira not achieved that dominant position on the ground, the second round would have looked completely different. Oliveira did not just hurt Poirier in the second round he got time to recover as well after taking a lot of damage in the first round.

Dustin Poirier knocked down and hurt Charles Oliveira on multiple occasions in the first round. Though some fans did protest Oliveira’s act following the fight, everyone had to agree that do Bronx did enough to prove that he was the best lightweight in the division at that moment.

In the post-fight press conference, even Dustin Poirier was not too sure whether Charles Oliveira cheated during the fight.

Beneil Dariush Ethnicity and Religion – Is the Iranian Fighter a Christian?