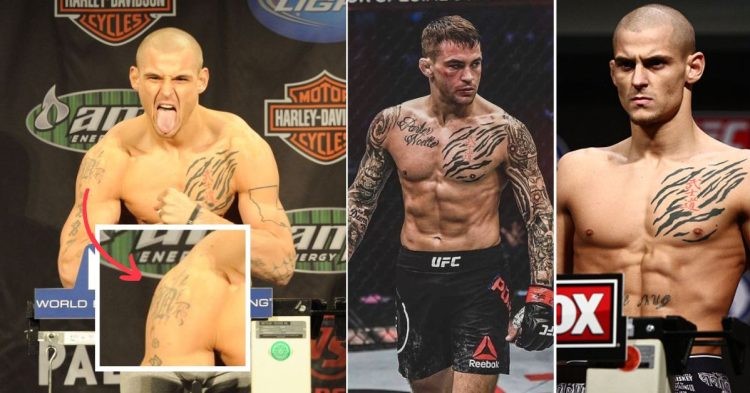 Dustin Poirier was just 14 years old when he got his first tattoo and he got it in a guy’s name “Shorty’s house”. Well, that is the case in Poirier’s hometown of Lafayette in Lousiana, where kids start to get tattoos as soon as they hit their teenage years.

However, for Dustin Poirier, it was both a mix both. A trend that his city has so clearly followed for all these years and moreover, an inspiration in his grandfather, who had almost his entire body inked.

“Where I’m from in Lafayette, Louisiana, a lot of guys had tattoos before they were 14 and all of them were blotchy and horribly done by tattoo guns, that were made at the house.” He said. Poirier was no different, and at 14 years of age, he got his first tattoo from the same tattoo gun.

According to multiple reports, Dustin Poirier has a total of 27 tattoos inked on his body. “The first tattoo I ever got, I was 14 years old, but it was a D on my shoulder with some flames on it and a pair of dice underneath it.”

“I got it done in a guy named Shorty’s house, I don’t even know his real name. A homemade tattoo gun, I’m not even sure why the dice and the flames.” Dustin Poirier said.

Getting a tattoo from a real artist in a tattoo shop would require consent. However, street tattoos came without any restrictions. There came a point in Poirier’s life where he kept getting these “street tattoos” done with “homemade tattoo guns” that his mother had to intervene, and how!

Dustin Poirier has over 27 tattoos and they all mean something

It was Dustin Poirier’s mother Jere’ Folley Chaisson who had to intervene after Poirier’s obsessions with tattoos made her worry about her health and wellness.

“I will sign consent for you, let’s go to a real tattoo shop if you gonna keep doing this to your body. Let’s just do it legally and do it with a real tattoo artist, where you won’t get a blood disease or something.” Poirier recalls.

Dustin Poirier doesn’t have tattoo regret, and believes that each of his tattoos reveals an interesting story about his life and he looks at them like they are a “passport full of stamps.” Poirier used to have a tattoo on his right bicep that read Poirier’s area code, 337. The UFC fighter wasn’t really a huge fan of that tattoo and had it covered with stripes coming out of a Japanese war mask.

Which Dustin Poirier tattoo is your favorite and why? Do let us know in the comments section.