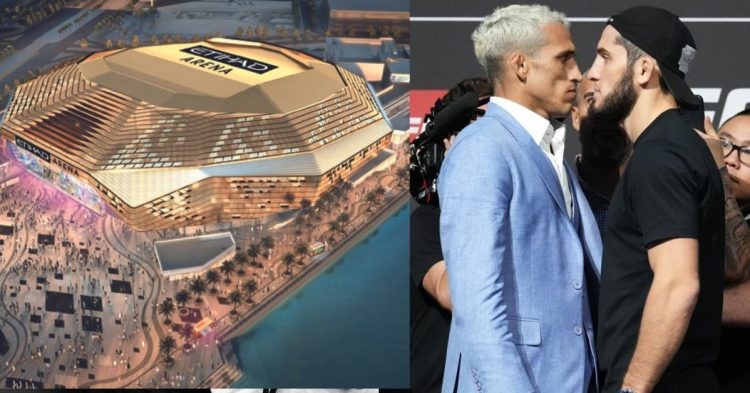 Back in 2020, when all other sports decided to stop their regular schedule, UFC president, Dana White tried and succeeded to put on UFC Fight Nights every other weekend. And that’s how an impactful relationship between UFC and Abu Dhabi began. And now Dana White returns to Abu Dhabi with UFC 280: Charles Oliveira vs Islam Makhachev.

UFC 280 is shaping up to be one of the biggest PPV cards in recent times. UFC 280: Charles Oliveira vs Islam Makhachev takes on in the iconic Etihad Arena, Abu Dhabi on 22nd October 2022.

UFC president, Dana White even stated that Oliveira vs Makhachev is crushing the numbers of UFC 254: Khabib Nurmagomedov vs Justin Gaethje.

Events in Abu Dhabi’s Etihad Arena have been some of the most exciting fight nights in UFC’s history. Let’s take a look at all the major events UFC has had in Etihad Arena.

Opened in January 2021, Etihad Arena hosted its first event with UFC on ABC: Max Holloway vs Calvin Kattar on 16th January 2021. The fight between Holloway and Kattar saw one of the best performances in the company’s history as Holloway landed over 700 strikes.

Following that, Etihad Arena hosted UFC Fight Night: Michael Chiesa vs Neil Magny on 20th January 2021. But, arguably biggest event Etihad Arena has hosted so far has to be UFC 257 where Conor McGregor made his UFC return and fought Dustin Poirier in a rematch on 24th January 2021.

Conor McGregor lost the fight by a second-round knockout. However, he managed to generate over 1.7 million PPV buys with his UFC comeback.

Besides that, UFC 267: Jan Blachowicz vs Glover Teixeira took place in the Etihad Arena and the fans witnessed history on 30th October 2021. Glover Teixeira became the oldest UFC fighter to win the light heavyweight title.

UFC has seen many iconic moments in Abu Dhabi’s Etihad Arena and at UFC 280 fans will certainly see a historic moment when the winner of Charles Oliveira vs Islam Makhachev will be crowned the new UFC lightweight champion.