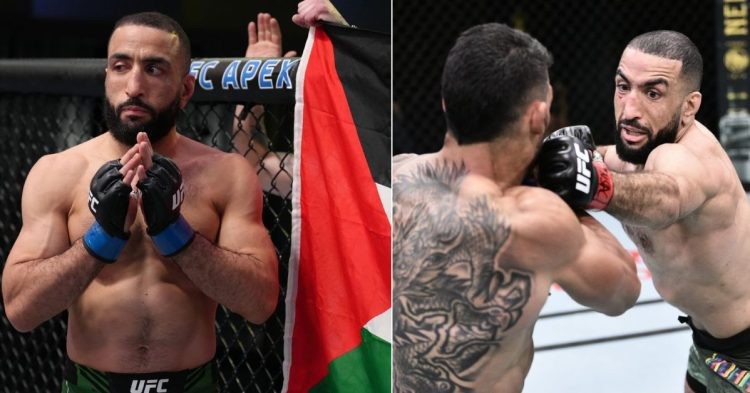 From stepping in on short notice to take on Leon Edwards, to fighting the likes of Stephen Thompson, Vincente Luque, and Demian Maia among others, Belal Muhammad has truly etched his name in the record books. Muhammad’s decision to take on the absolute best in the division is what sets him apart and quite evidently proves why he goes by the moniker “Remember The Name”.

Belal Muhammad fought Dhiego Lima back in February of 2021, where he picked up a hard-fought unanimous decision victory. When Edwards’ match-up with Chimaev fell through, Belal Muhammad decided to step in with a month’s notice. At the time, Edwards was ranked #2 in the UFC’s welterweight division. Needless to say, the decision was enough to affirm that the UFC fans would remember his name.

Belal Muhammad reveals the meaning behind his nickname “Remember The Name”

Belal Muhammad, who goes by the nickname Remember The Name, revealed the real reason behind the monicker in a conversation with Palestine In America.

“I didn’t want to come up with one of those, I wanted something real. I want to be remembered, I want people to remember the name. When my name is on the card, people are going to tune in because they know what type of fighter I am. They know I’m exciting and I’m going to bring a fight every single time.” Belal Muhammad said.

As a Palestinian, Belal Muhammad has never shied away from representing himself and his country on the grandest stage. UFC, arguably the biggest fighting promotion there is, Belal has always carried the Palestinian flag with pride and wants his fellow countrymen to do the same.

Belal is an inspiration to fighters around the world and credits UFC for not discriminating against fighters based on their religion or their ethnicity. He believes if you can fight, the UFC will promote you, and rightfully so. Sitting comfortably among the elites of the UFC’s welterweight division, Belal Muhammad is a living example.