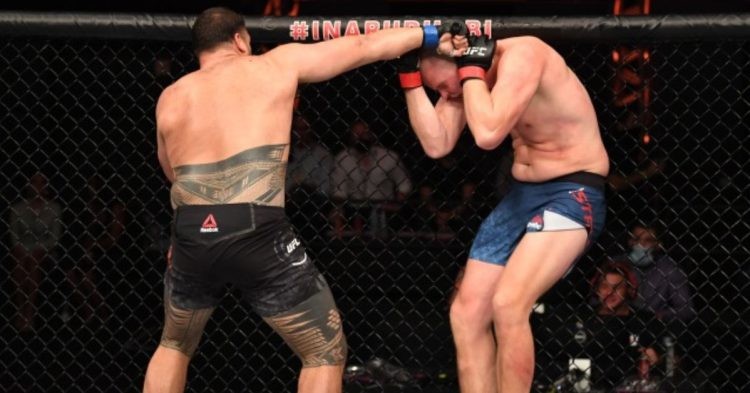 UFC 254 featured a heavyweight showdown between Tai Tuivasa and the human skyscraper, Stefan Struve. This was a crucial fight for Tuivasa who needed to make a statement on UFC 254.

After three losses in a row, the odds were against Bam Bam. Though fans liked his persona in and outside of the octagon the lack of impressive performances put his fighting career in jeopardy.

He lost to the former UFC champion, Junior Dos Santos via TKO. He lost to one of the toughest guys in the division, Blagoy Ivanov by decision. And he tapped out to a triangle choke against Sergey Spivak. But, Tai Tuivasa came back to the winning column on UFC 254 as he knocked out Stefan Struve.

It was obvious that Struve would have a clear reach advantage over Tai Tuivasa. And Tuivasa struggled a little at the beginning of the fight due to the reach difference. However, he was landing some good shots in the clinch against Struve.

Tai Tuivasa was controlling the tall posture of Struve against the fence and while breaking the clinch he was landing some good shots. And that’s how he got the finish over Stefan Struve, who can be a difficult opponent to figure out a gameplan for.

Tai Tuivasa landed a monsterous uppercut for the dub. Shame he couldn't do the shoey but I'm sure he'll get to it backstage 🍻 #UFC254
pic.twitter.com/1qaeRm7Z2c

Tai Tuivasa landed a big overhand right that dropped Struve. Tuivasa saw the opening and landed a few more big shots until the referee finally decided to stop the fight.

With this win, Tuivasa will gain his confidence restored for sure. He has joined AKA and has been training with some of the best heavyweights to ever do it such as Daniel Cormier and Cain Velasquez.

Bam Bam stops his three-fight losing streak but has nothing but respect for man-mountain Stefan Struve 🤝 pic.twitter.com/EjwXuR3jYV

Tuivasa even looked at the best shape of his career against Stefan Struve. Considering the changes he has been making in his training camp the fans can expect some spectacular things from Bam Bam in the near future.

UFC 254: Magomed Ankalaev Silences the Doubters With a Scary Knockout Over Ion Cutelaba