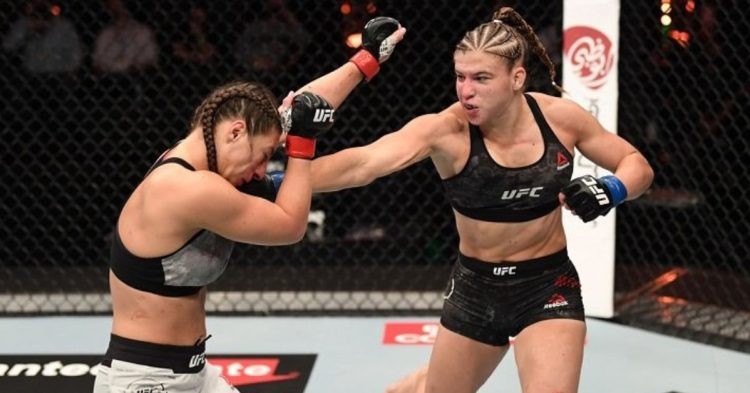 UFC 254 features a lightweight showdown between Khabib Nurmagomedov and Justin Gaethje. The hype for this fight is something that we have not seen for a while. But, it’s also a huge opportunity for the fighters fighting in the same card as Khabib Nurmagomedov. And former INVICTA flyweight, Miranda Maverick has made the most out of this opportunity at Fight Island.

On her UFC debut, Miranda Maverick took on Liana Jojua in the Early Prelims of UFC 254. And it was a performance that will become the highlight of Maverick’s career for days to come. Miranda Maverick won the fight via doctors’ stoppage after round one.

Early in the fight, it seemed that Liana Jojua had the advantage in striking over Miranda Maverick. Jojua was walking her down in the octagon and landing a left hand every time Maverick tried to close the distance. However, Maverick stayed busy on the outside and picked Jojua apart with some beautiful striking.

Jojua reacting to the stoppage. She wanted to keep fighting. Was completely 'there' and ready to keep going. #UFC254pic.twitter.com/46vfubHOYs

As the cutman was unable to stop the bleeding from the nose, the ringside doctors gave the verdict that the fight should not continue.

With this win, Miranda Maverick has now 8 wins in her short MMA career. And she has indeed the attention of the UFC fans with an impressive performance on her debut.

UFC flyweight division desperately needs contenders who can give some sort of trouble to the long-reigning queen of the division, Valentina Shevchenko. And if Miranda Maverick keeps on stacking win like this she might find her in the title picture after a few fights.

But, we have seen time and time again that fighters from other promotions face unfortunate outcome when they fight the UFC elites. Whether Miranda Maverick can continue her winning streak is something the fans will have to wait to find out.