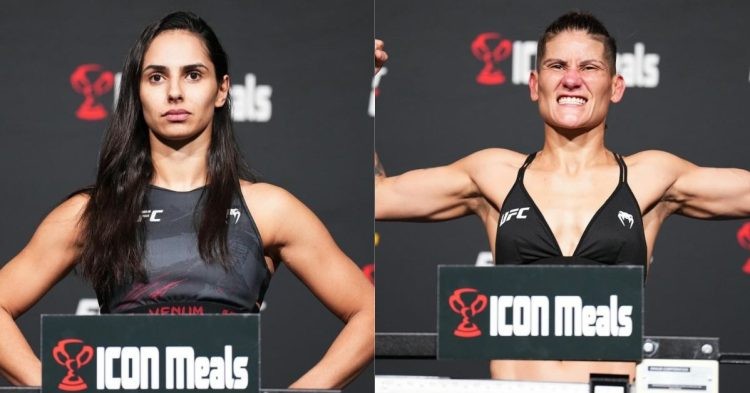 UFC Fight Night: Santos vs Hill will take place this weekend on August 6th at the Apex in Las Vegas. Ariane Lipski will kick off the show as she takes on Priscila Cachoeira in a three-round flyweight bout that will take place on the main card.

LIPSKI vs CACHOEIRA! #UFCVegas59 is LIVE and FREE TOMORROW on @espn! pic.twitter.com/GWqOITCoTe

The Queen of Violence is making her return inside the octagon after almost one year, Lipski last fought against Mandy Bohm. where she put on a one-sided striking display and outclassed her to win the matchup via unanimous decision.

Her opponent Cachoeira also picked up a win in her last fight over Ji Yeon. But it was a very controversial decision as the latter outstriked Priscilla significantly. Moving forward, let’s compare the stats of the two flyweights that will square off inside the octagon at UFC Fight Night.

Ariane Lipski’s has been very inconsistent throughout her UFC career as she has not been able to rack up a winning streak. Therefore it is needless to say that this matchup against Cachoeira at UFC Fight Night is very crucial as a win would help her gain a much-needed winning momentum.

The same could be said about Cachoeira who had a disastrous start as she failed to win a single matchup in her first three fights in the UFC. However, she has bounced back with three wins in her last four fights and has improved a lot.

Speaking about this matchup, fight fans can expect a brutal war as both Ariane Lipski and Priscila Cachoeira are aggressive fighters with great striking skills. Although Lipski can take advantage when it comes to wrestling as Priscila has struggled to defend takedowns and her jiu-jitsu skills could help her submit Cachoeira and win this matchup.

Amongst the two fighters, Priscila is the better striker as she has more power and lands at a higher output. However, Ariane Lipski has an advantage in striking exchanges as Cachoeira leaves herself open and gets hit a lot. Despite having a strong chin, it could turn out to play a major role if this fight goes to the distance.