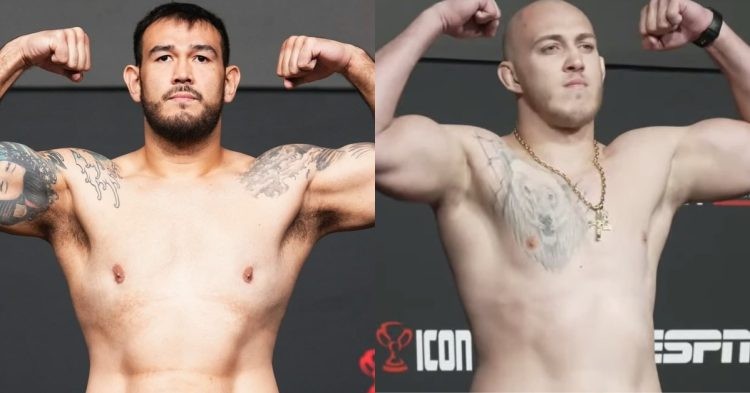 Augusto Sakai will make his return inside the octagon this weekend after a lengthy gap to take on Serghei Spivac in a three-round bout on the main card of UFC Fight Night: Santos vs Hill. This mouthwatering heavyweight clash will take place at the Apex in Las Vegas.

SAKAI vs SPIVAC! #UFCVegas59 is LIVE and FREE TOMORROW on @espn! pic.twitter.com/deCsTIHVex

Going into this matchup, Sakai’s UFC career will be at stake as he is going through a torrid time and consequently, he is in desperate need of a win. He has failed to register a single win in his last three fights. What’s more concerning is the fact that he has been knocked out in all those matchups.

On the other hand, Serghei Spivac is coming off a terrific knockout win over Greg Hardy in his last bout that took place at UFC 273. This matchup is a great opportunity for Polar Bear to make a statement against an opponent who is under pressure and earn a spot in the top 15 of the heavyweight division.

As we move ahead, let’s compare the stats of these two heavyweight contenders who will clash against each other at UFC Fight Night.

Augusto Sakai showed great potential to become one of the big superstars in the UFC after going on a brilliant four-fight-winning run since his debut in 2018. However, Sakai has been unable to replicate the same kind of form against top contenders and that has led to his downfall in the heavyweight rankings.

Speaking about this matchup, it would be interesting to see how this fight plays out as both Augusto and Spivac have different styles. The 31-year-old heavyweight contender likes to stand and bang. Meanwhile, Spivac is a well-rounded fighter who prefers to take the fight to the ground.

Augusto Sakai’s path to victory will be to be aggressive and keep the fight on the standup as much as possible. Moreover, he needs to finish the fight early because Spivac has good takedown skills and can make life difficult for the 31-year-old with his grappling and outclass him throughout the three rounds.

Serghei’s ability to mix it up well with striking and grappling makes him the favourite to win this fight. Besides, Polar Bear has great knockout power which makes it a bad matchup for Sakai.