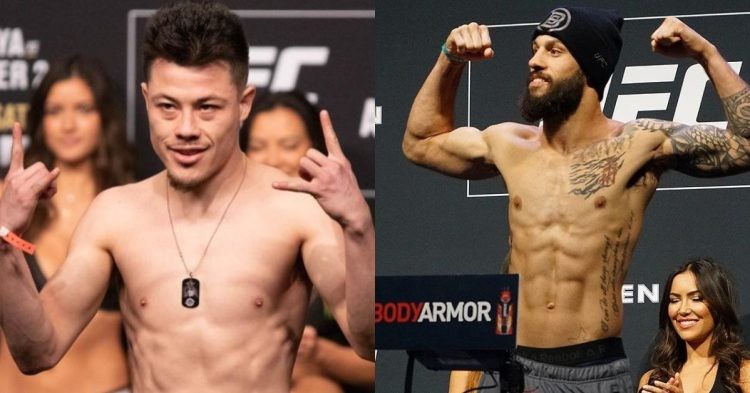 UFC Fight Night: Grasso vs Araujo will feature an exciting bantamweight battle between Mana Martinez and Brandon Davis. Both are coming off losses – Martinez will be taking his third fight in the UFC, while Davis will look to get his first win in his second fight after a return to the promotion.

Brandon Davis looks to pick up his first win since his return to the UFC. He went 2-5 in his first failing to impress although he had a couple of very tough matchups. Davis was submitted by Zabit Magomedsharipov in 2018 and then lost to Giga Chikadze in 2019 via a split decision.

After that, he went to the regional Gulf Coast MMA promotion and collected four straight wins. However, he was stopped in his return fight against Batgerel Danaa in the UFC a year ago.

Mana Martinez also looks to get back in the win column after losing to Ronnie Lawrence at UFC 271 back in February. That loss broke his three-fight win streak including his impressive debut win over Guido Cannetti. Martinez is a very good boxer with a lot of stoppage victories in his professional career. He faces Davis in the prelims of this weekend’s UFC Fight Night.

Mana Martinez is not only a highly technical boxer with very sound footwork but also a knockout specialist. His striking skills and standup techniques are phenomenal, as ‘Manaboi’ has accumulated eight knockouts from his nine professional fights.

However, his weakness lies in his ground game as he struggles against wrestlers and grapplers. To win this bout, Martinez will have to rely on his striking and hunt an early knockout. Dealing with his opponent on his feet should not be hard.

If the fight goes to the ground, it could be big trouble for the 26-year-old Texan. However, Martinez has basic jiu-jitsu skills and can defend himself on the mat.

On the other hand, Brandon Davis is an all-rounder with good striking and wrestling. ‘Killer B’ also has good cardio to keep up with his opponent and can use his explosiveness to deal with Martinez’s striking. Davis has suffered losses to renowned strikers like Chikadze and has shown a lot of inconsistency in the promotion.

However, the 32-year-old Atalanta has been fighting with a torn ACL, and after finally having it fixed, he is now at his finest. This should be an exciting stand-up battle between two amazing strikers. Martinez has phenomenal boxing, while Davis is known for his lethal Muay Thai skills. Other than that, Davis is also the better wrestler, which gives him the edge.

Martinez enters this bout as the betting favorite. That is because he is a younger and more consistent fighter. He is more agile and gives more damage with his power shots.

Meanwhile, Davis has been out for a year however, he still poses a bigger threat in the octagon.  However, he has the experience and skills to cause Martinez a lot of problems, given his solid Muay Thai background and jiu-jitsu skills.

Moreover, Martinez does not have a good takedown defense, but he is strong on his feet with his boxing skills. I believe this fight will go the distance and Martinez with his chain shots will get a decision win, if not a stoppage in the early rounds.