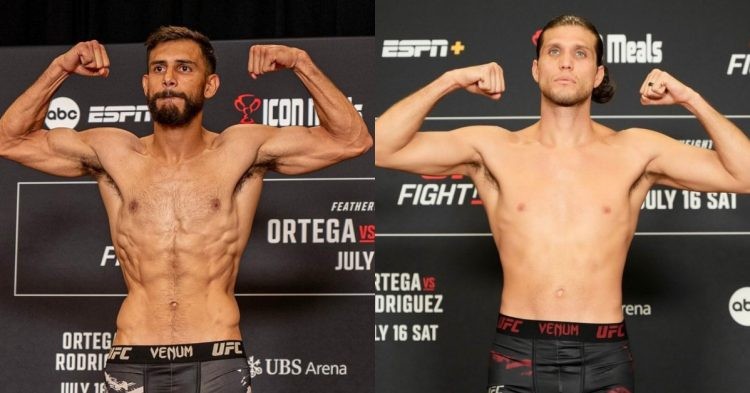 Brian Ortega and Yair Rodriguez weigh in. (Images via Twitter)

UFC will hold another event outside the Apex facility in Vegas this weekend. The Fight Night event this Saturday will take place in Long Island and it will feature Brian Ortega and Yair Rodriguez in the main event. With other top-ranked fighters out of contention, the bout between Ortega and Rodriguez may just determine the next contender for the featherweight championship.

Currently ranked no. 2 in the division, Brian Ortega is coming off a loss against the champ Alexander Volkanovski. It was his second title shot in 3 fights as he fought the former champ Max Holloway as well in 2018. He may just get another championship opportunity with a win on Saturday. Ortega has never lost 2 fights in a row and he will look to continue the trend this weekend.

Much like Ortega, Yair Rodriguez is also coming off a loss in his last fight. He fought Max Holloway in November of last year. Although Yair gave it his all, Holloway walked away with the victory after 25 minutes of war. Although he holds wins over the likes of The Korean Zombie and Jeremy Stephens, beating Ortega will be the biggest victory of his career yet.

With a possible championship opportunity on the line, who will have the advantage in a clash between two elite 145lbs fighters Brian Ortega and Yair Rodriguez? Let’s find out.

What are the key points for Brian Ortega against Yair Rodriguez?

Nicknamed T-City, Brian Ortega has perhaps the best Brazilian Jiu-Jitsu skills in the division aside from Ryan Hall. Ortega holds a 1st-degree BJJ black belt under Rener Gracie. Ortega looks effortless whenever he is in a grappling exchange with someone. He is the only fighter who came closest to handing Alexander Volkanovski his first loss in the UFC.

The 31-year-old holds 10 stoppage wins in his career and 7 of them came via submission. Although he only holds 3 knockout wins, all of those came inside the Octagon. He knocked Clay Guida out with a knee and stopped Thiago Tavares with punches. Brian Ortega was the very first fighter to knock out Frankie Edgar as well.

Brian’s all-around skills make him a danger for all of his opponents. He lands at an average of 4.15 strikes per minute and mixes in the takedowns pretty well. Although he has a takedown accuracy of 24%, Ortega makes the most of it whenever the fight hits the ground. He averages 0.87 takedowns and 1.2 submission attempts per fight.

Although Brian Ortega is very decent on his feet, it is probably his biggest weakness. Despite landing at a good average, Ortega absorbs 6.69 strikes per minute and Yair Rodriguez will look to take advantage of just that.

Rodriguez is a brawler who lands 4.65 strikes per minute. He also possesses fight-ending power at any moment of the fight. His spinning back fist KO of The Korean Zombie remains one of the best knockouts of the past decade.

Although he has not suffered the same fate since then, Yair hasn’t faced the same level of grapplers either. So El Pantera will have to avoid getting into grappling exchanges with Ortega at any cost.

Ortega vs Rodriguez: who wins this Saturday?

Brian Ortega will look to close the distance very early on in the fight. If he allows Rodriguez to have the space, the 29-year-old will definitely make him pay for it. Ortega suffered because of the same mistakes against Max Holloway and Alexander Volkanovski. Hence, he will look to follow the game plan that he had against The Korean Zombie last year.

Yair on the other hand, will have to be very careful with his strikes. He has the tendency of throwing caution to the wind and going for wild punches and kicks. If he does the same, Ortega will surely get a hold of him and drag him to the ground. Hence, he will look to be safe in the initial few rounds. Once the bout goes to rounds 4 and 5, Yair can then press the action and look for a stoppage win.