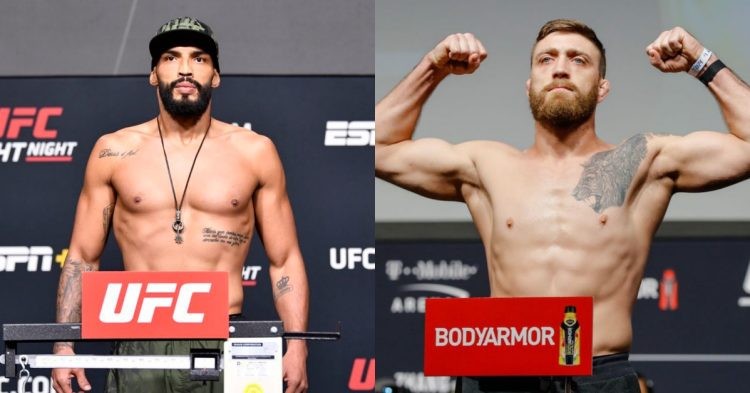 UFC is once again moving out of the Apex facility in Vegas for its next Fight Night event. The event is set to take place in San Diego this weekend. It will feature Marlon Vera and Dominick Cruz in the main event. But the main card will open with a middleweight fight between Bruno Silva and Gerald Meerschaert.

Bruno Silva is coming off a unanimous decision loss against Alex Pereira in May. However, he defeated Wellington Turman, Andrew Sanchez and Jordan Wright since making his UFC debut in 2021. Although he lost to Pereira, he put on a great fight and tested the Brazilian kickboxer.

Gerald Meerschaert’s recent form replicates his opponent on Saturday. After beating Bartosz Fabiński, Makhmud Muradov and Dustin Stoltzfus consecutively, Gerald lost his last bout to Krzysztof Jotko via unanimous decision. This weekend’s contest will be his 17th fight inside the Octagon since joining the company in 2016.

Bruno Silva vs Gerald Meerschaert will be a battle between a striker and a grappler. Silva has 22 wins in his professional MMA career and he has finished 19 of them via knockout with 0 submission wins. It gives the fans an idea about what to expect out of Silva against Meerschaert.

Nicknamed Blindado, Bruno Silva lands 4.94 strikes per minute while his opponents land 4.79 strikes on him in the same period. He even possesses a takedown average of 0.89 with an accuracy rate of 18%. His grappling will be in focus against Gerald Meerschaert who is exceptional on the mat.

Meerschaert averages an insane 2.89 takedowns per fight with an accuracy rate of 40%. He also attempts 1.8 submissions per fight. Hence, it is safe to assume he will rely on his grappling against Silva on August 13th. In terms of striking, GM3 lands 3.04 strikes per minute while absorbing 3.53 strikes at the same time.

Both fighters have obvious strengths and weaknesses. While Silva is a knockout artist, Meerschaert has 26 submission wins in his career. On the other hand, Meerschaert has 3 knockout losses and Bruno has 5 submission losses. Hence, It is not hard to predict how the fight may play out.

Following a devastating knockout loss to Khamzat Chimaev, Gerald has shown signs of improvement in striking. So Meerschaert will definitely try to make Silva lunge at him with big strikes so that he can level change and get a takedown. But, the question is, can he survive Silva’s power? Only time will tell.

But as things stand, the smart money will be on Gerald Meerschaert. He is clearly the better grappler and has enough striking skills to avoid Bruno’s power punches. Although there is a possibility of him getting knocked out, his submission skills give him the edge over his opponent.