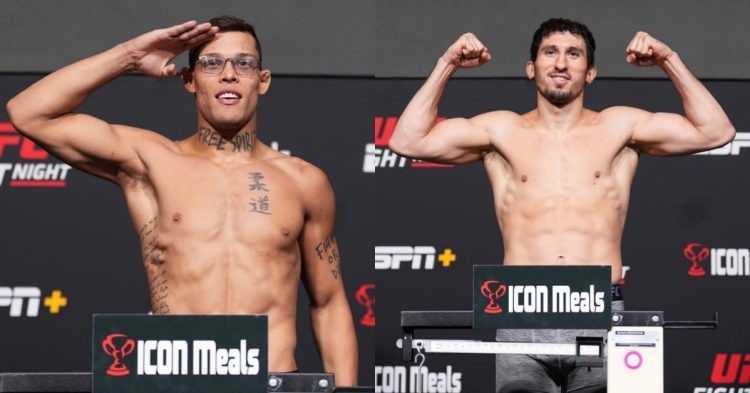 Nicknamed The Natural, Caio Borralho started his pro MMA career in 2014. Although he lost the second fight of his career, Borralho has been unbeaten ever since. However, Caio’s journey to the UFC main roster was not the easiest one. He had two cracks at the Dana White’s Contender in 2019 and 2021.

Following his stoppage win over Jesse Murray last year in the contender series, Borralho finally earned his UFC contract. He made a successful debut against Gadzhi Omargadzhiev in April of this year. After a couple of cancelled bouts in the last few months, Caio will finally return to the Octagon this weekend against Armen Petrosyan.

Quite similar to Borralho, Armen Petrosyan also came to the main roster after beating Kaloyan Kolev in the contender series last year. On his debut in February, Petrosyan beat Gregory Rodrigues via a split decision.

Both fighters are very new to the company and such a high-profile spot at a fight night event is good a way to make a great impression on the fans watching all across the world.

Caio Borralho has a very good striking defence. The Brazilian only absorbs 1.70 strikes per minute while landing 3.66 strikes at the same time. But the most impressive aspect of his game is his grappling. He hands 1.96 takedowns per fight with an accuracy of 80%. He also has a 75% takedown defence.

But Borralho does not have to worry about getting taken down by Armen Petrosyan. The 31-year-old is a buzzsaw who is an absolute elite-level of striker. He lands 7.56 strikes per minute, which is unheard of. Petrosyan’s striking is not only good offensively, he is defensively sound as well. At 3.39 strikes per minute, his absorption rate is very low.

But he only has a 37% takedown defence. Hence, it is something to worry about heading into a fight against Borralho. The 29-year-old has 4 knockouts and 3 submission wins. On top of that, grappling is a big part of his game. Hence, Armen will have to look for an early knockout. Otherwise, Caio will secure a takedown and probably get a submission finish.