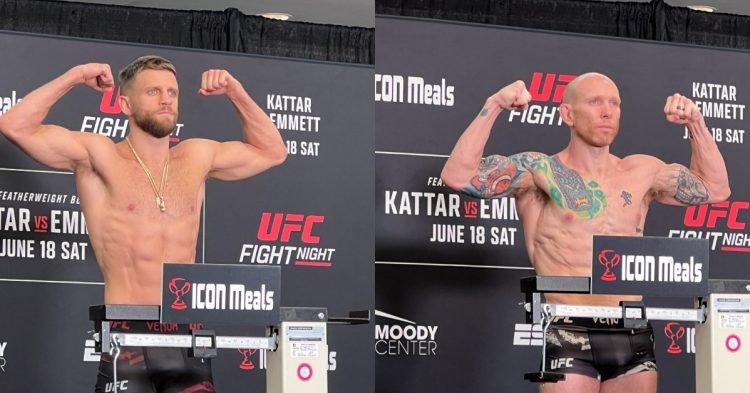 Calvin Kattar vs Josh Emmett will headline the UFC Fight Night event on June 18th. Unlike the recent Fight Night events, this particular card will be in Austin, Texas instead of Las Vegas. Kattar occupies the 4th position in the featherweight division, whereas Emmett is in the 7th position.

Following his humiliating defeat at the hands of Max Holloway in 2021, Kattar has bounced back this year in January. He handled Giga Chikadze in style and got the dominant unanimous decision victory. The Boston native not only out-landed Giga, but he also displayed an impressive array of grappling as well.

No signs of stopping!

Josh Emmett on the other hand, defeated Dan Ige upon his return to the UFC. In 2020, he sustained some serious injuries that ruled him out of action for more than a year. But Josh did not seem to miss a beat as he swiftly moved around the Octagon and performed to the best of his abilities.

Calvin Kattar vs Josh Emmett: Who wins this Saturday?

Both Josh Emmett and Calvin Kattar are well into their 30s. Hence both are looking to make rapid strides toward the belt. This bout will be crucial in their quest of capturing the belt. The winner here will certainly have an outside chance of getting a title shot. The champ Alexander Volkanovski has already cleared out the division. Hence, he is looking for fresh blood to face.

So the contest this Saturday becomes a very significant one for the future of the division as well. Now the question is, who wins the bout this weekend? Let’s find out!

Whenever there is a list of the best boxers in the UFC is made, Calvin Kattar has to be mentioned in it. He has perhaps the best boxing fluidity in the entire roster. The Boston native lands 5.19 significant strikes per minute.

Kattar also has an amazing takedown defence of 89%. However, he gets hit quite often as well. Calvin absorbs 7.64 shots per minute. But that is mostly because of his fight against Max Holloway.

Josh Emmett is not as fluent of a striker as Kattar. However, he is much more powerful than his opponent this Saturday. Emmett has a per-minute strike average of 4.28 with a defence rate of 62%. He also mixes in takedowns very well in his fights. Josh averages 1.25 takedowns per fight.

Both fighters are incredibly durable. Hence the prospect of seeing an early finish is quite slim. Instead, the fight is most likely to be a back-and-forth war that goes the distance in a possible fight of the year contender.

Emmett has averaged more than 1 knockdown per fight so far in the UFC. Hence, he will have the power advantage. But Kattar is amazing at outfoxing his opponents and eventually outpointing them.

Ultimately Kattar’s boxing may prove too much for Emmett who will resort to wrestling at some point. It will be a contest of durability between two very good featherweights. Although Emmett is the more compact fighter, Calvin has defeated better-quality opponents.