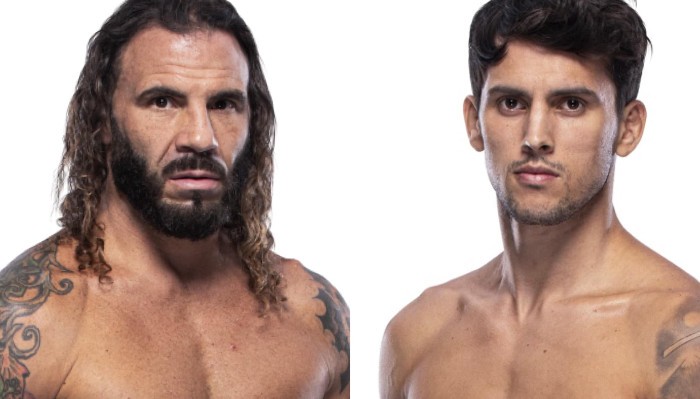 This Saturday from the UFC Apex, Las Vegas, another Fight Night card has been scheduled featuring Clay Guida vs. Claudio Puelles in a very exciting lightweight bout for the Co-Main event.

Despite being 40-years-old, Guida is the fan-favorite here (-110) against 25-years-old Puelles. This proves that the UFC veteran Guida is still kicking hard, despite his old age.

Clay Guida continues to defy his age and proves all the critics wrong, fighting off and winning against the younger fighters. Guida is coming off a submission win against Leonardo Santos in December.

On the other hand, Claudio “El Nino” Puelles is riding a 4-fight win, most recently via a submission win over Chris Gruetzemacher from back in December last year. He has showcased impressive submission skills, mostly the kneebars, since his debut back in 2016.

UFC Vegas 52 will feature an entertaining lightweight bout between the 40-year-MMA legend in Guida and a rising prospect in Puelles.

Guida should not be underestimated because of his age, as he is known for his explosiveness and his superb durability, even after being in so many battles. He likes to engage in a high strike rate and is a cardio beast.

The 40-years-old is an aggressive fighter with an excellent striking skillset, along with his other capabilities as a wrestler, and a grappler. ‘The Carpenter’ prefers to keep the fight on their feet mostly but also has excellent defensive wrestling as well. He has been often seen going crazy with his dynamic striking towards his opponents and making it a bloody fight.

Meanwhile, Claudio Puelles is an elite grappler with 6 of his 11 career victories coming via submission. He has also displayed his improved sharper striking since making the move to Sanford MMA last year.

Puelles prefers a slower pace with a defensive style and deals with the pressure well, while often trying to hunt for a submission. He has excellent Jiu-Jutsu skills and even when he doesn’t pull off a submission, he is very active on the mat.

Then again, Puelles is still improving as a striker and he still needs more refinement in that area, as he was pieced up by Silva before pulling off the Hail Mary submission.

Who will get the Win between Guida and Puelles?

Due to Guida’s obvious reach disadvantage, he will definitely enter the pockets with his aggressive striking. But if Puelles keeps his consistency with his reckless takedown and submission attempts against a relentless pressure fighter like Guida, it can prove to be a fight-ending mistake.

But Guida has also been submitted 10 times in his career, although fighting for almost two decades can make up for that number of losses.  I believe like his past fight, Guida can still manage to grab a win even against a much younger and skilled guy like Puelles.

However, Puelles has the edge here for his excellent grappling. While Guida has more weapons in his arsenal and can implement his aggressive style to make this fight messy, a submission win over ‘The Carpenter’ is still not far-fetched.