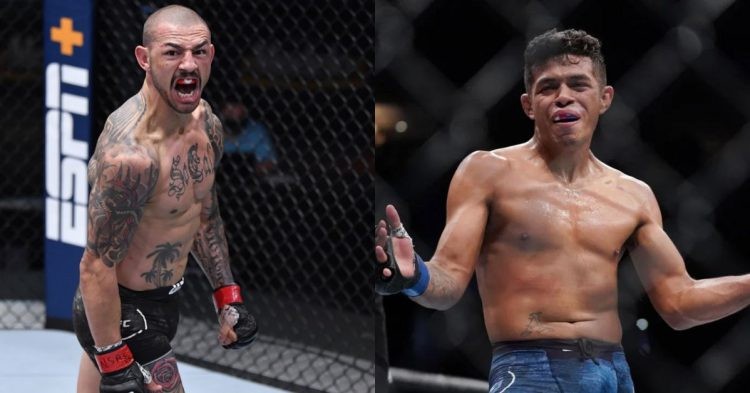 Cub Swanson will face Jonathan Martinez in the co-main event of this weekend’s UFC Fight Night from the UFC Apex, Las Vegas. They have been scheduled to fight for three rounds in the bantamweight division.

‘Killer’ will go down a weight class to take on a much younger opponent. The UFC legend rebounded from his scary loss to Giga Chikazde with an impressive first-round Knock out of Darren Elkins. However, age is not on his side and the weight cut can severely take a toll on the veteran.

On the other hand, Jonathan Martinez will have the opportunity to win the biggest fight of his career so far. He will look to improve 17-4 with a win over the aging veteran featherweight. Martinez is on a 3-fight win run and will seek his fourth consecutive victory.

The veteran is going down to the bantamweight class for the first time in his career but is also on the verge of his retirement. This means he will have a bit of trouble adjusting to his new weight while he faces an agile and strong opponent.

‘Killer’ is still a dangerous fighter while he competes at a high level at 38 years of age. However, cutting down weight will also compromise his cardio and he might get gassed out early in the fight. But he has faced opponents who are levels ahead of Martinez and has experienced a lot in his 40 fights.

Meanwhile, Jonathan Martinez has been fighting at the weight longer than ‘Killer’ and is also about a decade younger than his opponent. He is very agile and has displayed solid conditioning in his recent fights.

The “Dragon” mixes up punches and kicks to control the distance and is also very offensive in style. However, if Swanson manages to get inside and catch him with a good shot, it could mean trouble for Martinez.

But Martinez is still improving as a fighter and is naturally strong in his weight. He should have a little problem dealing with his opponent but also need to be aware of the veteran’s dangerous standup skills. Even then, Cub cannot be underestimated as he is as gritty now as in the early stage of his career.

Swanson is a forever dangerous striker, and he’s much more experienced than his opponent.  In the featherweight division, he’s finished 17 fights out of his 28 wins. However, the veteran is in the twilight of his career, and going down the weight division can also hamper his performance.

Martinez will look to neutralize ‘Killer’ in the earlier rounds as this fight has less possibility to go the distance. With age and durability on Martinez’s side, I believe it is safe to assume that the “Dragon” will stop Swanson on Saturday.