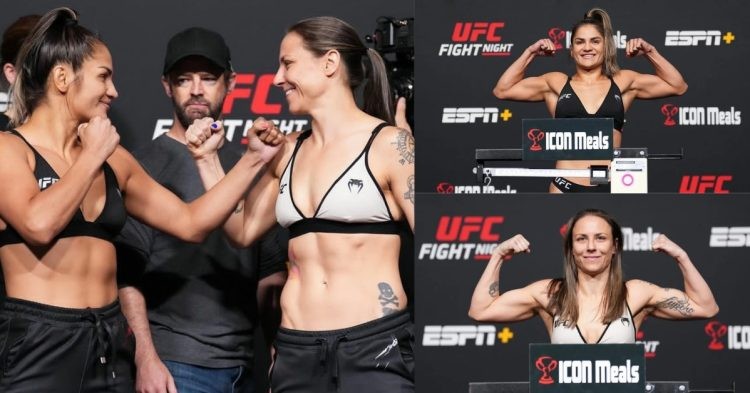 UFC Fight Night: Dos Anjos vs Fiziev will begin with its proceedings this weekend on July 9th at the Apex in Las Vegas. Apart from the spectacular main event clash, UFC Vegas 58 features several exciting matchups that fans should keep an close eye out.

CALVILLO vs NUNES! #UFCVegas58 is LIVE and FREE TOMORROW on @espn! pic.twitter.com/eaLK2tAV8p

One such fight from the main card is the three round women’s flyweight bout between Cynthia Calvillo and Nina Nunes. Cynthia Calvillo is going through a rough patch and same could be said about Nunes. Because both the fighters have failed to register a single win in their last two fights.

Despite their bad run, they are just two or three wins away from becoming a title contender. Therefore this fight is very important in terms of how the flyweight division progresses. Before breaking down this fight, let’s compare the records, height and reach of Calvillo and Nunes that will clash inside the UFC octagon.

Nunes will step inside the octagon after three years and staying out of the fight game for such a significant period will cause her a lot of problems against Cynthia. Stylistically speaking, this is a classic striker vs grappler matchup. So we can expect Cynthia Calvillo to attempt a lot of takedowns at UFC Fight Night: Dos Anjos vs Fiziev.

On the feet there is no doubt that Nina Nunes has all the tools to outclass Cynthia Calvillo. She is more powerful than Calvillo and can piece her up if she manages to stuff her takedown attempts. However, it is easier said than done because her poor takedown defense has been the biggest reason for her losses.

Therefore Calvillo has a great opportunity to control the fight with her grappling and come out of her losing skid at UFC Fight Night. The only problem for Calvillo going into this fight will be her durability. Owing to the fact that she has lost her previous two fights via knockouts or stoppage.

Cynthia would have to stay away from any unnecessary striking exchanges and make sure that she does not allow Nina to get into her rhythm.