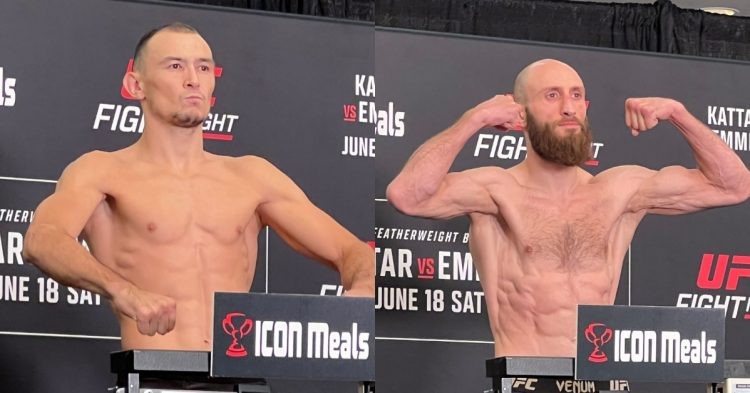 Damir Ismagulov and Guram Kutateladze weigh in for UFC Fight Night this weekend. (Images via Twitter)

UFC’s lightweight division has another exciting prospect in Damir Ismagulov and he will be in action this weekend. He takes on Guram Kutateladze on June 18th. UFC has a big fight night event coming up this Saturday and it has many exciting fights. Fighters such as Calvin Kattar, Donald Cerrone and Kevin Holland will all feature on the card.

Damir Ismagulov first fought for the UFC in 2018. Although he has managed to remain unbeaten, Ismagulov has only had 4 fights in the promotion. He had a long layoff after beating Thiago Moises in August of 2019. Damir did not compete for almost two years and came back against Rafael Alves in 2021.

Known as the Georgian Viking, Guram Kutateladze made his UFC debut in 2020 against Mateusz Gamrot. All total, Guram has won 9 back to back fights in his career. He was scheduled to fight Don Madge twice in 2021 following his UFC debut. But both times the bout was cancelled. Now he will finally come back against Damir Ismagulov this Saturday.

Can Damir Ismagulov continue his unbeaten run in the UFC against Guram Kutateladze?

Both Damir Ismagulov and Guram Kutateladze are excellent grapplers in their own right. But surprisingly there are only two submission finishes combined in their respective careers. Hence there is every chance that the winner of this fight will be determined on basis of who the better striker is.

Guram Kutateladze did not have the most convincing UFC debut against Gamrot. Not only was he taken down 5 times, but Guram was also outstruck as well. But he did manage to knock Mateusz down in the bout. That swayed the judges’ opinions in favour of him.

Damir Ismagulov has won all 4 of his UFC fights via unanimous decision. So far he has landed 7 takedowns with an average of 1.75 takedowns per fight. He has a decent amount of output as well with 3.75 significant strikes per minute.

Damir also has one knockdown in the UFC against Thiago Moises. But he was knocked down as well in his last fight against Rafael Alves. Hence there are some question marks over his chin.

While Guram doesn’t have the most amazing takedown defence in the world, Damir doesn’t quite have the most solid chin either. Hence the bout will be an interesting one given the contrast between the two. Guram will try to land power shots from the outside in the hope to catch Damir with one of the punches.

But Ismagulov has the better wrestling and he would hope for an early takedown against Kutateladze. Wrestling skills trump striking skills more often than not. Hence, Damir Ismagulov will be the slight favourite to win on Saturday.