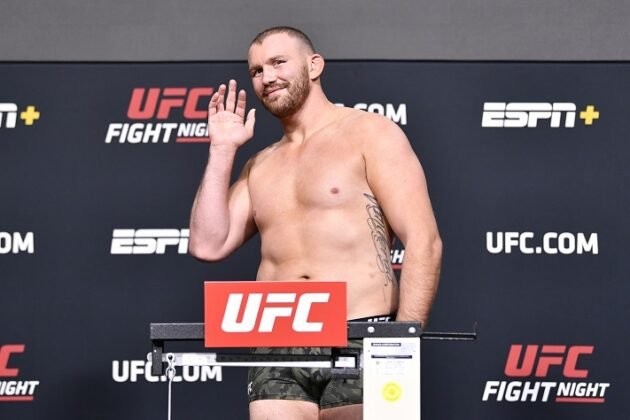 This weekend UFC Fight Night: Dern vs Rodriguez will be taking place at the UFC Apex in Las Vegas, Nevada. In the preliminary card, UFC have placed a massive Heavyweight fight, where the undefeated giant Alexandr Romanov will be taking on Jared Vanderaa.

Alexandr Romanov (14-0) kept his undefeated record intact in April after his fight with Juan Espino was halted due to a low blow. In the third round of their right, the Moldovan was accidentally hit below the belt and was unable to continue, which meant that the fight had to go to the judge’s scorecards. Romanov won a technical split decision.

Jared Vanderaa (12-5) bounced back after losing his UFC debut to Sergey Spivak in February. “The Mountain” fought Justin Tafa in May in an absolute bloody slugfest in which they were rewarded Fight of the Night. He would win a unanimous decision. Vanderaa won a UFC contract last season by finishing Harry Hunsucker.

Alexandr Romanov has an undefeated record. He is one of the most talented heavyweights right now, with a fantastic ground game. Before signing in the UFC, he fought in one of the most famous Russian promotions, the Eagle Fighting Championship, where he earned 11 victories in a row. All of them via submission or TKO.

Romanov likes to wobble his opponent on the feet, and then try to quickly look for a submission finish. Often hunting the neck, Romanov is adept at choking his opponent out in a variety of ways. He has finished two fights by ramming his forearm into the throat of his grounded opponent until they tap.

Jared Vanderaa was able to bounce back against a fellow striker in his second UFC fight. His debut was against a grappler in Serghei Spivac, and Spivac absolutely iwned Vanderaa in the grappling realm. Spivac took him down three times and ultimately ground and pounded Vanderaa out in the second round.

This matchup with Romanov is similar, yet worse. Romanov is a much larger human and more of a wrestler. He also has heavier ground and pound and has more arsenal of submissions. It would be interesting to see who can overpower the other in this bout.