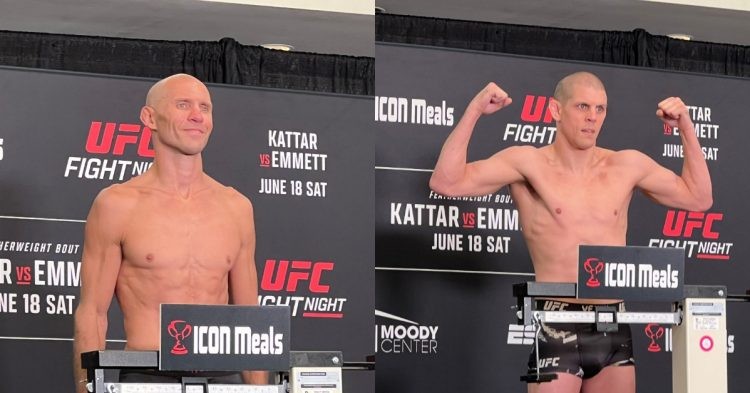 Donald ‘Cowboy’ Cerrone will fight fellow UFC veteran Joe Lauzon on this weekend’s UFC Fight Night card. The lightweight bout will serve as the co-main to the headliner between Calvin Kattar vs Josh Emmett.

Donald Cerrone is on the worst stretch of his career at the moment. The former lightweight title contender has not won a single fight since crossing paths with Tony Ferguson in 2019. Following that he has suffered back-to-back losses to Justin Gaethje, Conor McGregor, Anthony Pettis and Alex Morono.

Joe Lauzon, on the other hand, will have his first UFC fight in 3 years. In his last outing, Lauzon beat Jonathan Pearce in the first round via TKO. Prior to that, he was on a 3-fight losing skid. Joe has not been a very active fighter since 2017. In the 5 years following that, he has fought only twice.

Donald Cerrone vs Joe Lauzon: Who wins on Saturday?

Although this is a professional bout between two highly decorated Mixed Martial Artists, the outcome of the bout does not hold much significance in the larger context. The fans will be grateful to see two veterans in action, possibly for the last time inside a UFC Octagon. But both Donald Cerrone and Joe Lauzon will give it their collective best to win. So let’s find out how the bout may play out.

Joe Lauzon is a black belt in Brazilian Jiu-Jitsu and his fight style is based purely on grappling. He has a takedown average of 2.39 per fight and Lauzon attempts 2 submissions per fight. But his striking stats are really eye-pleasing. Joe lands at an average of 2.84 strikes per minute and absorbs 5.39 significant strikes at the same time.

That is something that Donald Cerrone will be looking to take advantage of. Cowboy has a background in kickboxing and has 10 knockout victories in his career. But he has more finishes on the mat as Donald has submitted 17 opponents so far in his career. Cerrone averages 4.43 strikes per minute and has an accuracy of 46%.

It seems on paper that Donald Cerrone finally break his losing streak and beat Joe Lauzon to end his career on a high. But it is Lauzon who is coming off a win. Hence the fight promises to be fascinating and the loser will most probably bid farewell to the sport.