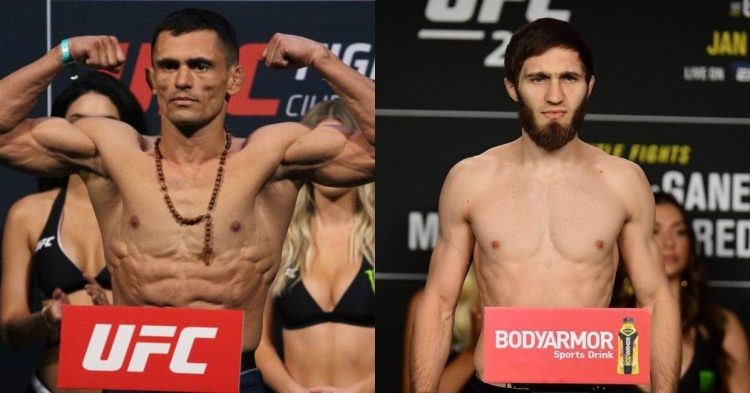 After a highly entertaining set of fights at the UFC 276 PPV, the promotion will be back at the Apex this weekend as the highly anticipated UFC Fight Night: Dos Anjos vs Fiziev takes place in Las Vegas. Just like every other fight card, this UFC Vegas 58 event features several exciting bouts that one should keep a close eye out for.

Said Nurmagomedov fight week! 😍😍
I will say this though, Douglas Silva de Andrade is SOLID. So this should be a good scrap.#UFCVegas58 pic.twitter.com/1vqQdqLFwg

One such bout is the three-round bantamweight matchup between Douglas De Silva Andrade vs Said Nurmagomedov that will take place on the main card of the event. Both the bantamweight fighters are on the back of a two-fight win streak and it would be fascinating to see which contender moves closer to the top 15 of the stacked 135-pound division.

D Silva’s biggest reason for not breaking into the top ranks is his inconsistency. The Brazilian bantamweight has been unable to string a good streak of wins. However, Douglas has bounced back strongly with two back-to-back finishes to his name after losing to Murphy in 2021. As we move ahead let’s compare the stats of the two bantamweights that will square off against each other at the Apex in Las Vegas.

Said Nurmagomedov who is the cousin of former lightweight champion and recent Hall of Fame inductee Khabib Nurmagomedov has impressed fans around the world since making his UFC debut in 2018. He has recorded four wins in his five fights and has won three of those fights via knockout or submission.

With that being said, Said is an extremely dangerous fighter with good technical skills. Unlike several Russian fighters who like to grapple, Said Nurmagomedov relies more on his striking abilities. Similarly, Andrade is also an explosive striker who likes to land high output of strikes and put his opponents on the backfoot.

However, D Silva’s aggressive approach comes with a big risk as he tends to get wobbled by his opponents after overexposing. So far the Russian bantamweight has managed to outclass most of his opponents with his brilliant striking and good distance management.

Consequently, the only way for Silva to win this fight would be to go for the kill and close down the distance as much as possible. Nonetheless, fans can expect a violent fist fight and it looks like one of these two bantamweights is getting dropped or submitted.

In the end, by taking a look at their fighting styles and overall abilities, the likelihood of Said finishing D Silva and getting his his hands raised by his referee is pretty high.