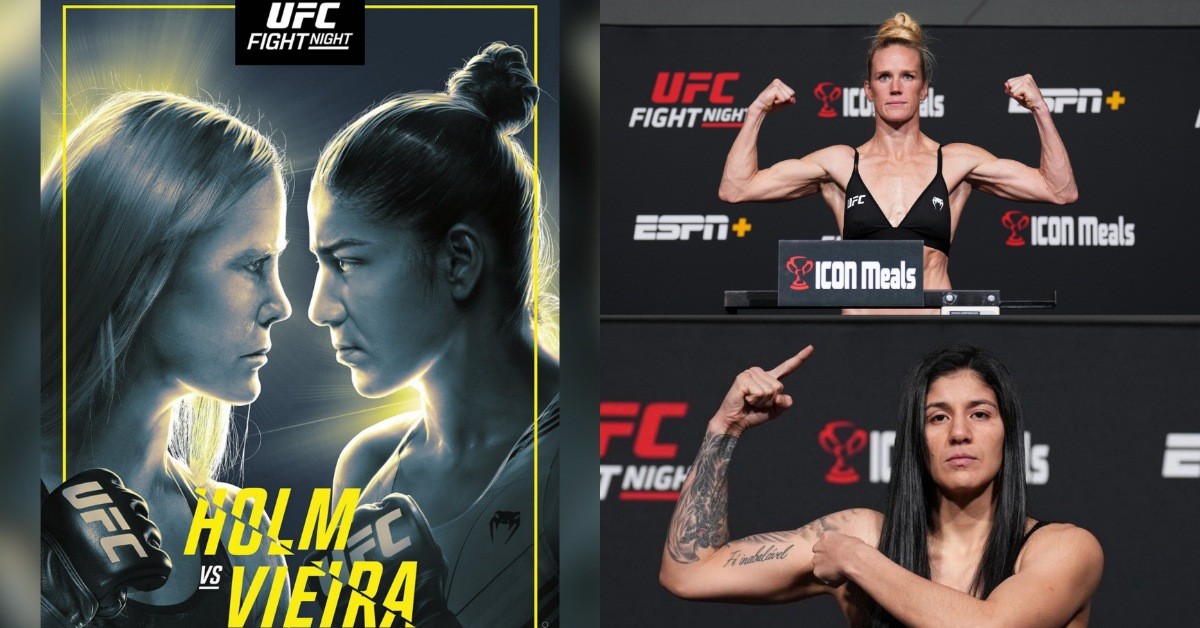 The Ultimate Fighting Championship (UFC) is back with another of its weekly Fight Night cards. In the main event, Holly Holm will go up against Ketlen Vieira. Both fighters are in the Top 5 of the women’s bantamweight division. Holm currently occupies the 1st position, while Vieira is at 3rd.

Holly Holm came into the UFC as a decorated boxer. There were a lot of doubts regarding her potential to succeed in the company. But proving the critics wrong, Holm became the 135lbs champion by knocking out Ronda Rousey at UFC 193. Although she has not reached the same heights in her UFC run afterwards, Holly Holm is still a formidable force.

Ketlen Vieira is coming off a unanimous decision win over Miesha Tate in November of 2021. But she has had a turbulent run in the last 2 years. Before beating Tate, Ketlen had suffered two losses in the hards of Irene Aldana and Yana Kunitskaya. However, she also managed to get a win over Sijara Eubanks in between those two losses.

Holly Holm vs Ketlen Vieira will be a fascinating contest to behold. While Holm is clearly the better stand up fighter, Vieira has better Jui-Jitsu skills. Not only is she a black belt in BJJ, Ketlen also holds a black belt in Judo as well. Hence, she will have the advantage on the ground. As per her career stats, the 30-year-old lands 1.71 takedowns in a 15-minute fight. But due to this fight being the main event, Vieira will have more time to work on securing a takedown.

But she can be found lacking in the striking department. Ketlen absorbs 4.07 strikes per minute while landing 3.07 strikes. That stat will certainly excite Holly Holm as she is one of the best strikers in the division. She lands at a rate of 3.16 strikes per minute. Holm also has a very good takedown defence rate of 76%.

Hence, it is safe to assume that it will be a very frustrating 25 minutes for Vieira if he can not take Holly down. As evident by her recent fights, the 40-year-old is not an aggressive fighter pursuing a takedown anymore. Instead, she prefers to methodically pick her opponents apart from the outside and coast to victory. The Preacher’s Daughter does a very good job at clinch.

The style of the match-up does not seem ideal for producing a potential ‘Fight of the Night’ contender. But it is a crucial bout for the division that may produce the next contender for the title.