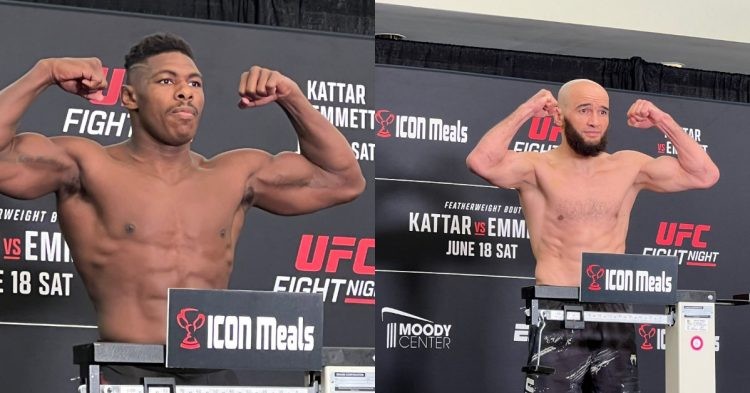 Buckley made his UFC debut against Kevin Holland, who also fights on this card as well. Although he lost via TKO, Buckley bounced back with a spectacular knockout win over Impa Kasanganay in October of the same year. Currently, he is on a 2 fight win streak with notable wins over Antônio Arroyo and Abdul Razak Alhassan.

In September of 2021, Albert Duraev first made an impression on UFC fans. He fought Caio Bitencourt at Dana White’s Contender Series and submitted Caio with a neck crank in the first round. Albert then put on another dominant performance against Roman Kopylov at UFC 267.

Albert Duraev has in total 9 victories via submission in his career. It shows how dominant he is whenever he secures a takedown. On top of the submission wins, 3 wins via KO/TKO as well. But he is not very comfortable on his feet. It is very evident by the fact that he has 3 losses in his career and all of those came via knockouts of various kinds.

Joaquin Buckley will be the perfect candidate to take advantage of that as he has insane power behind his punches. Not just his punches, Buckley is deadly with his kicks as well. Buckley is surprisingly proficient with his takedowns as he averages 2 takedowns per fight. However, he is yet to submit any of his opponents in the UFC so far.

What their records show is that both possess skills that contrast the other. But Buckley has a slightly better record with grappling than Albert has with striking. Hence, Buckley will have a better chance of landing the harder punch and knocking Duraev out. However, Duraev will also have a good chance of winning if he can secure takedowns on a regular basis.