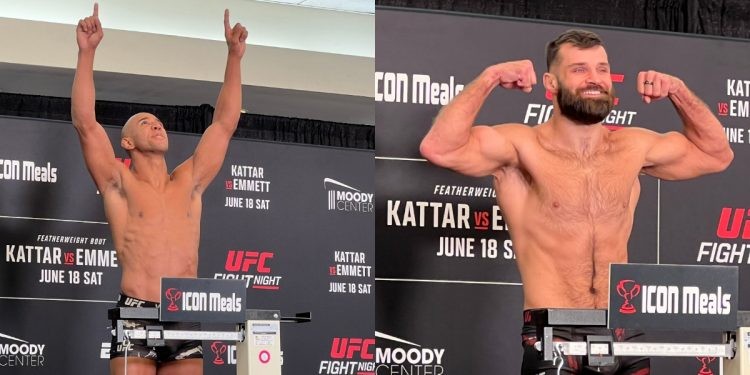 After weeks of events inside the UFC Apex facility in Las Vegas, this weekend’s Fight Night card will finally hit the road. The event features a lot of potential Fight of the year candidates such as Calvin Kattar vs Josh Emmett, Donald Cerrone vs Joe Lauzon and Tim Means vs Kevin Holland.

But main card proceedings will start with a middleweight bout between Julian Marquez and Gregory Rodrigues. Neither Marquez nor Rodrigues is part of the rankings in the 185lbs division. Hence both will try their best to get into the Top 15 of the weight class and winning on Saturday will be the right step in that direction.

Despite making his debut in 2017, Julian Marquez has only had 4 fights in the company. He impressed UFC president Dana White with a head kick knockout win over Phil Hawes in the Contender Series. In his very first fight, Julian earned a fight of the night bonus against Darren Stewart.

But the split decision loss against Alessio Di Chirico in 2018, prompted Marquez to take a break of almost 3 years. He finally returned to fighting in 2021 and is currently on a two-fight win streak. His opponent this Saturday is going to be Gregory Rodrigues.

Unlike Marquez, Gregory is fresh in the world of UFC. Making his debut only last year, Rodrigues has defeated Dusko Todorovic and Jun Yong Park in his first two fights. But he lost to Armen Petrosyan in February this year via split decision.

Who will win the war between ‘The Cuban Missile Crisis’ and the ‘Robocop?’

Julian Marquez has an elusive finishing rate of 100%. He has 6 KO/TKO wins and 3 submission wins so far in his career. It proves that not only is Marquez a powerful striker, but is also a very crafty grappler. In his last two fights, Marquez choked out Maki Pitolo and Sam Alvey via anaconda choke and rear-naked choke respectively.

Hence, there is not much to differentiate the fighters on paper. However, Marquez has lost both of his fights that went the full distance. Gregory may look to take a conservative approach and try to outpoint Marquez. But at the same time, the Brazilian has been finished before, whereas Marquez is yet to be submitted or knocked out.

Both fighters have amazing nicknames as Marquez is called ‘The Cuban Missile Crisis’ and Rodrigues is known as the ‘Robocop’. Neither Julian nor Gregory will hold back in the bout. There is a high possibility of an early finish from Marquez. However, if the bout goes the distance, Rodrigues will be the most likely winner.