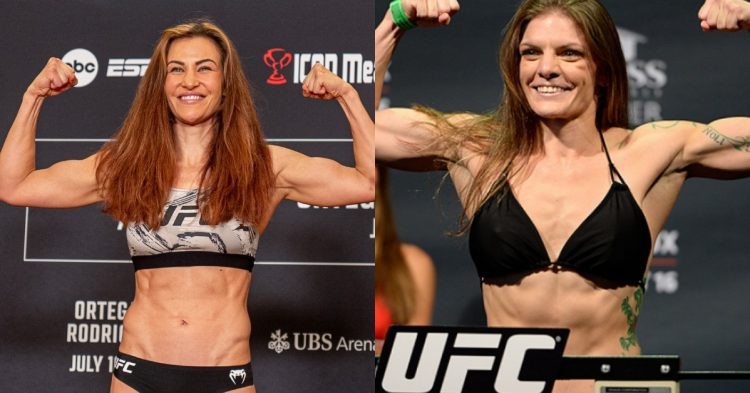 Miesha Tate vs Lauren Murphy weigh in. (Images via Twitter)

Miesha Tate will finally step inside the Octagon to face Lauren Murphy this weekend. The bout was scheduled to take place twice before but got cancelled due to various reasons. However, this time it looks like both fighters are ready and the contest will finally take place at UFC Long Island.

This will be Miesha Tate’s debut for the company at flyweight. She lost her last fight to Ketlen Vieira in 2021 at bantamweight. Hence, Tate wants a fresh start in a different weight class and Murphy is the perfect opponent to start her journey in the 125lbs division. Lauren is ranked very high in the division and beating her may give Tate the next title shot against Valentina Shevchenko.

Kicking off the main card action on @ABCNetwork 📺

However, Lauren Murphy is no pushover. Although she lost to Valentina Shevchenko in her last outing, Murphy is a force to be reckoned with in the flyweight division. Lauren had won 5 consecutive fights heading into the bout against Shevchenko. The win streak included two stoppage wins over Mara Borella and Liliya Shakirova.

Lauren Murphy lost both of her first two UFC fights against Sara McMann and Liz Carmouche. Although she won against Kelly Faszholz, Murphy traded wins and losses for a while. However, following her loss to Sijara Eubanks, Murphy went on the best run of her life.

Throughout her UFC career, Murphy has averaged 1.03 takedowns per fight with an accuracy of 34%. But her takedown defence needs some work as Murphy was taken down 3 times in her last fight. She currently possesses a takedown defence of 65%. However, she has been more of a brawler historically.

Murphy holds 8 knockouts in her career so far. She lands at about 3.58 strikes per minute while absorbing 4.35 strikes in the same period. The stat proves that Murphy lures her opponents into having a brawl and possesses enough power to put them down.

Miesha Tate on the other hand, has much more of a diverse fighting style. She has 11 finishes in her career and 7 of them came via knockout. But Tate also does have 4 wins under her belt as well. Cupcake averages 1.99 takedowns per fight and has a takedown accuracy of 31%. She also has 1.4 submission attempts per fight.

Although Miesha absorbs more punishment than she dishes out, it is much more constrained in comparison to Murphy. Tate lands 2.41 strikes per minute and absorbs 2.87 strikes per round. Hence, there is a risk of Murphy being able to dominate her with strikes.

Miesha may not have the reach advantage, she will definitely have the size advantage. If she does manage to grab a hold of Murphy, Tate can definitely drag her down to the mat and get the job done in a dominant fashion. Lauren is much older than Tate as well. Hence there is a chance that the former 135lbs champion overwhelms Murphy with her wrestling.