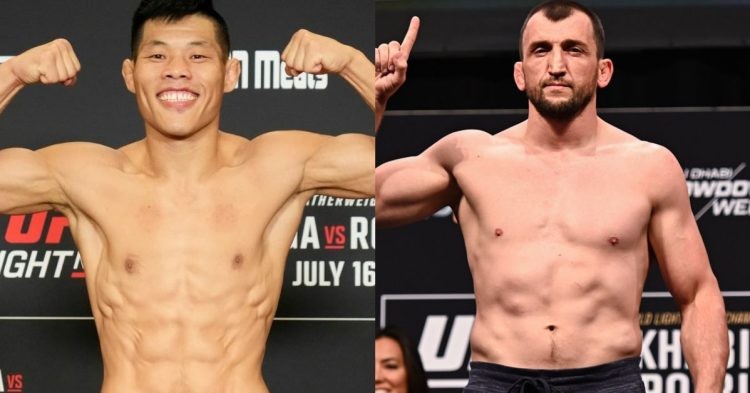 UFC Fight Night: Ortega vs Rodriguez will take place this weekend on July 16th in Elmont, New York and there are several exciting matchups on the card that one should watch out for.

JINGLIANG vs SALIKHOV! #UFCLongIsland is LIVE and FREE TOMORROW on @ABCNetwork at 2pm ET! pic.twitter.com/Si9L0JBAZ7

One such fight is the three-round welterweight matchup between Li Jing Liang and Muslim Salikhov that will take place on the main card of the event. The Leech is making his return inside the UFC octagon after almost ten months from his lopsided submission loss to Khamzat Chimaev at UFC 267.

Similarly, his opponent is getting back in action after a year’s gap. However, before the fight begins, it is safe to say that momentum would be on the side of Salikhov as he is on a brilliant five-fight winning streak.

As we move ahead, let’s compare the stats of these two welterweights that will square off inside the octagon at UFC Fight Night.

Will Li Jingliang be able to put an end to Muslim Salikhov’s winning run at UFC Fight Night?

Li Jingliang who is currently #14 in the welterweight division is one of the most experienced UFC fighters in this weight class. The Leech has won ten fights in the UFC and has consequently, impressed the fans with his brilliant skills. However, the Chinese welterweight has been unable to make it to the top ranks.

The biggest reason is his highly inconsistent performances in recent fights. After brutally knocking out Santiago Ponzinibbio at UFC Fight Night: Holloway vs Kattar, Jingliang was picked apart by Khamzat Chimaev in stunning fashion.

There is no doubt that Li Jingliang is an exciting fighter with great striking power and decent wrestling skills but he needs to get on the front foot as soon as the bell rings and take an aggressive approach. Because Muslim Salikhov is very precise when exchanging blows and his striking defence of 68% shows how good he is in an all-out standup fight.

Moreover, he uses a wide variety of leg kicks which is dangerous and it makes it difficult for his opponents to close the distance. Unless Jingliang manages to find a way and finish the fight early on then one can expect Salikhov to control the range and significantly outstrike the Chinese welterweight to get his hands raised at UFC Fight Night.