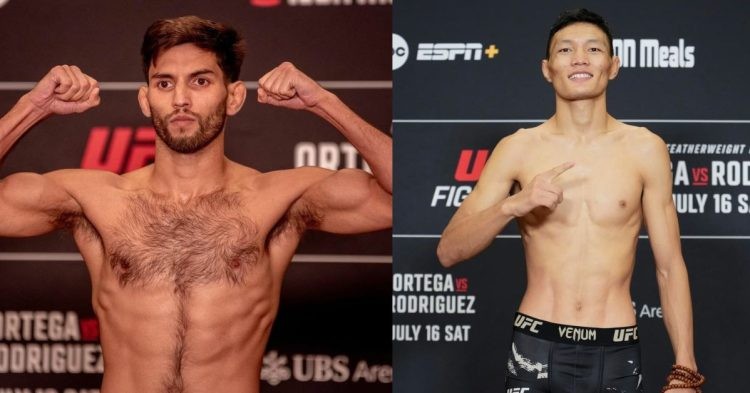 UFC Fight Night: Ortega vs Rodriguez is all set to begin with its proceedings on July 16th at the Elmont’s UBS Arena in Long Island. Apart from the highly anticipated featherweight main event clash, this event features a mouthwatering main card matchup between Matthew Schnell and Sumudaerji.

SCHNELL vs SUMUDAERJI! #UFCLongIsland is LIVE and FREE TOMORROW on @ABCNetwork at 2pm ET! pic.twitter.com/jNUDb4tObR

This matchup is a three-round bout that will take place in the 125-pound weight class. Going into this fight, Matt Schnell is looking for a quick turnaround after his submission loss to Brandon Royval in the last fight at UFC 274. On the other hand, Sumudaerji is on a great run and will be looking to extend his winning streak to four wins and make a case for getting into the top 15 of the division.

As we move ahead let’s compare the stats of the two flyweight fighters that will collide against each other on the main card of UFC Fight Night.

Matthew Schnell’s biggest concern going into this fight is his highly inconsistent performance. To add to that, Danger’s poor UFC record of 5-4-1 is a big testament to why he has been unable to rise to the top of the flyweight division.

Whereas Sumudaerji has shown great potential of becoming a future star in this division by bouncing back with three successive wins after a dreadful debut loss. Speaking about their styles, both Danger and The Tibetan Eagle like to stand and strike.

However, Sumudaerji is a much better striker with good accuracy and output if we compare him to Matt. So the key path for Schnell to grab a victory at UFC Fight Night would be to take the fight to the ground and submit the Tibetan flyweight.

Because Sumudaerji has a slight reach advantage and he would probably outstrike him if he defends all the takedown attempts. But if Matthew manages to exploit Sumudaerji’s ground weaknesses then he would most likely get his hands raised at UFC Fight Night.