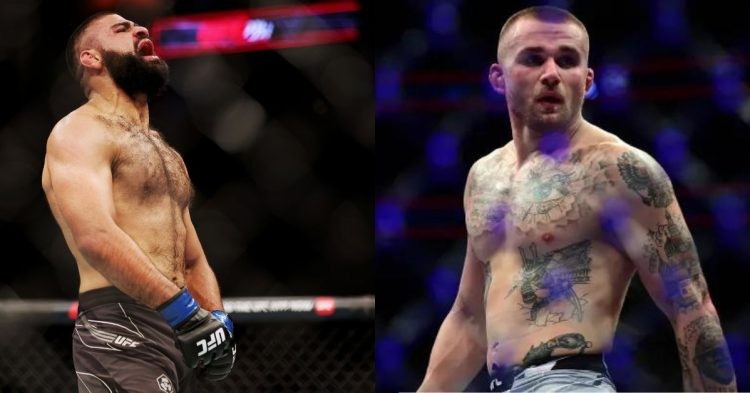 Nick Maximov (8-1) will take on Jacob Malkoun (6-2) in the prelims of UFC Fight Night 212. Maximov is coming off his first defeat against Andre Petroski in his professional career. He looks to stretch his 2-1 record with another win in the promotion this weekend.

On the other hand, Malkoun also looks to get back in the win column. He is coming off a decision loss against Brendan Allen. Malkoun has a record of 2 wins and 2 losses in the promotion, and a win will do him good this weekend when he faces Maximov in a middleweight bout at UFC Fight Night: Grasso vs. Araujo.

Nick Maximov has a good wrestling background and also the ability to hurt his opponents on his feet early in the fight. He employs his wrestling and mixes up his strikes well enough to tire out his opponents. However, being in the elite promotion, Maximov will need to improve a lot to survive in the middleweight division.

Maximov’s striking is good but not enough to get a win in this bout. Despite good wrestling, Maximov must find a strategy to beat a wrestler of his level. Maximov has good cardio but his striking must be up to the mark, as he struggles regularly against a good grappler.

As for his opponent, Jacob Malkoun is also a grappler, but with better technique. He uses an aggressive style of grappling to pressure his opponents. Malkoun can utilize his ground game well enough to control his opponent and find a submission.

Malkouin’s clinch style of wrestling has proven to be very effective where he uses this to expose his opponent’s weakness or deplete their gas tank. Apart from that, Malkoun has more experience and the fight IQ going into this fight. However, he lacks athleticism but as a veteran in the sport, he has a sound technique.

Maximov will have a sizeable height and reach advantage along with the athleticism on his side. However, Malkoun has far more experience and has faced more accomplished grapplers than Maximov. Not to mention that Malkoun has superior techniques than his opponent.

Despite the advantages, Maximov lacks his skills against the veteran and will need a lot of improvements. Maximov is a good all-rounder but he often struggles to control a fight on the ground.

Moreover, Malkoun has the fight intelligence and better striking skills to rely on, and if the fight goes on the ground, Malkoun can beat Maximov there also.