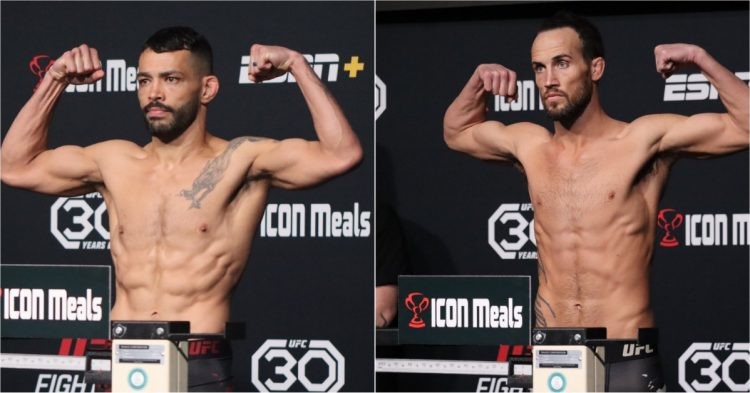 This weekend’s UFC Vegas 67 will feature a featherweight co-main event. The bout is set between the fan-favorite, and hard hitter Dan Ige and the in-form Damon Jackson. The event will take place on January 15th at the UFC Apex in Las Vegas, NV.

In what has shaped up to be a relatively decent card when it comes to Fight Night events, the fight is supposed to be a striker vs grappler match-up. Moreover, Dan is coming off of a streak of losses that involves back-to-back decision losses to names like Chan Sung Jung, Josh Emmett, and Movsar Evloev.

Damon Jackson (@damonbjackson) believes Dan Ige is nothing more that "just another guy in his way.”https://t.co/H94uqK5KDL

On the other hand, Damon Jackson is in the form of his life, going 4-0 with a finish on Pat Sabatini last time around. With a range of KO/TKO and submission finishes under his belt, there is no doubt that we could see another finish from him. Now 34, we could be seeing a final push toward getting into the featherweight rankings from Jackson.

Speaking about his fight against the #13 ranked Dan, Jackson feels up to the challenge. As such ‘Action’ believes that Ige is a formidable opponent, but is just another fighter for him to take down and make his way into the rankings. Notably, Jackson is aware of the striking threat that Ige brings to the table, and will likely prepare a suitable game plan to deal with it.

With ‘Dynamite’ currently sitting at 1-4 in his last 5 outings, we expect him to come out of the blocks very quickly. Having lost against some of the best in the division, Dan ’50K’ Ige will be looking to make his way back into the win column. Thus, come Saturday night, fans are expecting nothing short of fireworks from Ige.

Both fighters have the same reach, giving neither any substantial advantage in that department. However, Dan is far superior as a striker and boasts 3.8 significant strikes landed per minute. With his UFC career on the line, count on Ige to give us a fight to remember.

Similarly, Jackson, a Brazilian Jiu-Jitsu black belt, has a large advantage when it comes to grappling in both submission averages (almost 6x), and takedown averages (2x). Moreover, Jackson’s takedown accuracy is also just shy of 2x that of Ige.

Whilst Dan’s takedown defense and grappling are not the best, we believe that it is something he will have worked on, especially after the Evloev fight. When it comes to wrestling, both fighters are seemingly on par, and thus, cancel each other out. Whilst we expect Jackson to try and turn the fight into a grappling contest, taking it to stand-up will be Ige’s best route to victory.

Due to his form, Ige was surprisingly written off by many. Initially, Damon came in as the favorite which has since shifted in favor of Ige. As such, we believe that Dan is simply the better fighter out of the two, but will have to work hard to grind out a win.