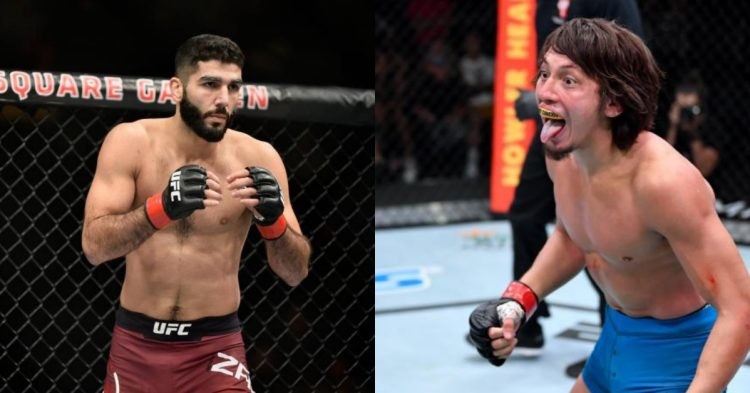 UFC Vegas 58 is set for this weekend and the card promises to be an entertaining one. In the main event of the night, Rafael Fiziev will take on veteran Rafael Dos Anjos. Although the rest of the card does not contain any big stars, it’s full of fights that have the potential to be amazing.

However, not just the main card, the prelims look promising as well. The prelim main event will feature Aiemann Zahabi and Ricky Turcios. The fight between Zahabi and Turcios will take place in the bantamweight division and both fighters are unranked at the moment.

Aiemann Zahabi came into the UFC with an unbeaten record of 7-0. He made his UFC debut almost 5 years ago in 2017. Zahabi beat Reginaldo Vieira on his debut via unanimous decision. But Zahabi took a bad knockout loss in his second bout against Ricardo Ramos. Since then, he has only fought twice in the last 3 years. However, Zahabi is coming off a win against Drako Rodriguez.

Ricky Turcios is the winner of the Ultimate Fighter Season 29. He won against Liudvik Sholinian via unanimous decision in the final of TUF 29. Before coming into the UFC, Ricky had stints at Fury FC and Bellator. After TUF 29, Ricky fought Brady Hiestand on his main roster debut and beat him via split decision.

Aiemann Zahabi is a very well-rounded fighter who has 5 knockout wins and 2 submission victories. He lands at an average of 2.82 strikes per minute. But, with an absorption rate of 3.91 strikes per minute, Zahabi does need to make some improvements to his stand-up game. He tries to mix in his takedowns as well. But at 16% accuracy, he lands 0.16 takedowns per fight. Zahabi possesses a 72% takedown defence.

Ricky Turcios has a very high rate of punching output. Nicknamed ‘Pretty,’ Turcios lands 7 strikes per minute while absorbing 4.23. Despite landing 7 strikes per minute, he only has a striking accuracy of 45%. It shows how active he is on his feet. Not only in striking, with 22% accuracy, Ricky also lands 1 takedown per fight.

From the stats mentioned above, it does seem like Aiemann Zahabi is in for a rough day in the office. However, he does have a greater amount of power behind his punches. But Turcios does seem like he has the better skill set among the two. The 29-year-old has been more active lately as well. Hence, he will be the favourite to get the win on Saturday.