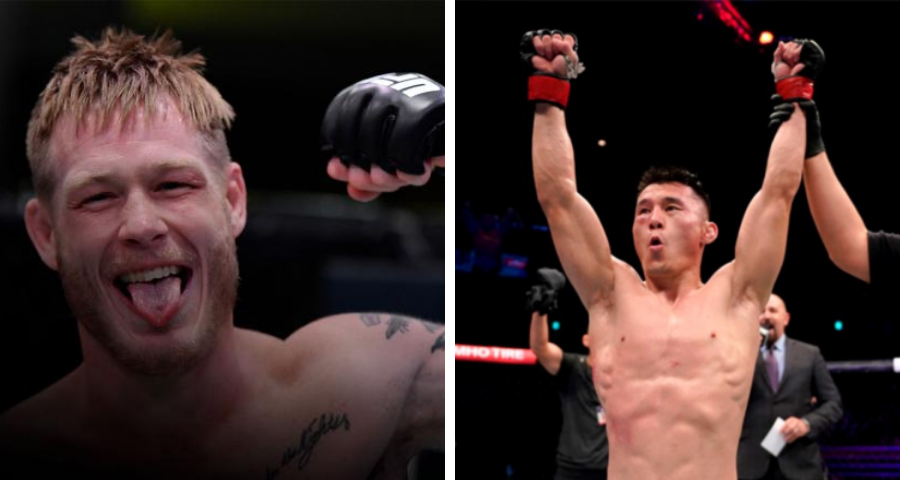 Alateng Heili vs. Kevin Croom at UFC on ESPN 34 is an exciting fight in the bantamweight division. Both men are in need of a win after Alateng gave up a win for a draw due to an illegal cage grab in September of last year and Croom lost a hard-fought decision to Brian Kelleher earlier this year.

Coming off of a draw against Gustavo Lopez,  Alateng Heili (14-8-2) will be aiming to put his poor recent form behind him this weekend. It’s been over two years since Alateng has last tasted victory. Therefore, ‘The Mongolian Knight’ has the chance to show what he’s capable of against a tough opponent.

On the other hand, Kevin Croom (21-14) is also enduring a tough time inside the octagon at the moment. He is coming off a loss to Brian Kelleher in January. ‘Crash’ won his UFC debut against Roosevelt Roberts in September 2020, but the decision was overturned due to Croom’s marijuana use. The experienced veteran will be looking to pick up his first win in the UFC this weekend.

Alateng has pure wrestling as his background, though he is a power puncher, who uses fast powerful punches, namely the right straight or overhand and likes to follow them up with a crisp left hook. He also utilizes the right overhand into a roll under to bridge the distance.

Alateng stands orthodox and has shown a weakness to southpaws in the past when it comes to their left body kicks. He maintains a very high guard, and especially when he is hurt or pushed back, he tends to raise the right guard high and extend his left, exposing the ribs resulting in receiving some fight-ending strikes.

In terms of grappling, the edge has to go to Alateng with his pure wrestling pedigree, although Croom has a better submission game. But Alateng is specifically good at shooting deep and always looking to turn the corner on his takedowns, securing either the finish or ending up on the back.

Croom is also an orthodox fighter, but one of his key strengths is his ability to fight off both sides and utilize his lead left kick. His kicking game will be a key component against Alateng.

Alateng has also shown a vulnerability to fighters who use quick shots and counters before he can throw his hooks and throwing straights and hard jabs have also been proven to be effective.

Croom can fight to move in pretty much any direction, and while he doesn’t necessarily throw punches straighter than most fighters, if he can add this to his game plan it will certainly help him to win. Furthermore, using straight shots more predominantly will be supported even more by his reach advantage.

This is a fight that both men can win. Croom will have a significant advantage in both the height and reach department in this bout. Croom’s distance control, straight shots, and left body kick are going to be key elements in beating someone like Alateng.

Meanwhile, Heili has been very cautious in his last few fights. This weekend, he needs to be on the front foot from the off. In his defeat to Kelleher, Croom struggled immensely with his efficient grappling skills of Kelleher. Therefore, I believe that Heili will look to use his solid striking to set up his offensive wrestling in an attempt to outpoint Croom.

However, based on their previous fights, Croom seems to be the one that can be the better fighter who can adapt and change things up a mid-fight, and if Alateng once again shows his wrestling too late, I think Kevin wins this fight.